INDUSTRIAL action caused by a breakdown in negotiations between Pacific National and the Rail, Tram and Bus Union (RTBU) is putting more grain on the road as exporters scramble to get tonnage to the state’s three grain ports in time to meet shipping schedules. 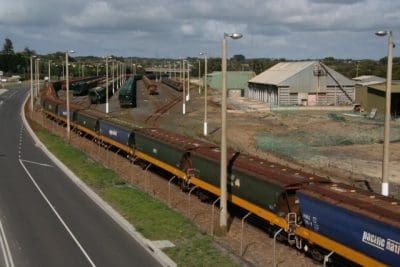 Cargill Australia director of corporate affairs, Peter McBride, estimated the dispute had already caused the cancellation of 15 trains Cargill had booked over March, April and May.

“That’s 30,000 tonnes of grain we’ve had to get to port, and at 40t per truck, that’s 750 truck movements. Since the start of this dispute, it’s certainly put a lot more trucks on the road,” Mr McBride said.

Victoria’s grain export program is scheduled to ship more than 250,000t this month from the state’s three grain ports.

These are the GrainCorp facilities at Geelong and Portland, which are scheduled to load a total of 195,500t of grain this month, and the Emerald Grain facility at the Port of Melbourne.

At this stage, no rail movements of grain to port are expected this week following the RTBU’s plan to take industrial action over pay and conditions for rail crews, which was met with a lock-out from rail operator Pacific National.

Mr McBride said exporters were wearing the cost of the impasse by having to pay more for road transport than they would for rail, and demurrage when vessels could not be loaded within the scheduled timeslot.

“We’re incurring the cost, and we hope Pacific National and the union can resolve this as soon as possible.”

“If I had another 20 trucks, I could use them at the moment no problem. It’s crazy,” Pearson’s Grain and Transport logistics manager, Frank Capone, said from his Swan Hill office.

He said grain receival points on rail lines were having to outturn grain for road rather than rail transport when trains were cancelled, or wait for the next train in the hope that the segregation called for was the same.

“If it’s not, you might have to transfer grain between silos and bunkers, because they want wheat instead of barley or barley instead of wheat.”

Mr Capone said competition for truck slots had boosted the per kilometre rate for operators from around 9.5-10c to 11.5-12c.

“It’s been a big let-down with the train system. It’s been good for carriers to get the work, but it’s hard for everyone that wants trucks to find them at the last minute when a train is cancelled. “

According to a 2012 GrainCorp report, the company’s Geelong terminal can store up to 225,000t in vertical bins, and its latest shipping stem forecasts exports from the port will total 195,500t in May.

Grain shipments scheduled for GrainCorp’s Geelong and Portland terminals this month include 105,000t of barley in three separate cargoes booked by ADM, GrainCorp and Nidera, and 167,500t of wheat in two Cargill and two GrainCorp cargoes.

Pacific National has been in discussions about a new Enterprise Agreement (EA) with the RTBU for more than 12 months.

“We respect our hard-working train crew who have been diligently transporting Victoria’s record grain harvest to the ports over recent months, so we are extremely disappointed that negotiations have not progressed further,” a Pacific National spokesperson said in a statement.

“The RTBU has recently notified us of further Protected Industrial Action, with further work bans commencing over the coming weekend, and a 48 hour stoppage planned for Monday and Tuesday… and a further 24-hour stoppage on Friday, May 5.”

“As such, we have taken the difficult decision to engage in Employer Response Action, from 00.00 Monday 1 May through to 00.00 on Saturday 6 May 2017.  During this period, employees will not be permitted to attend work.”

Pacific National said it was continuing to negotiate, and if the RTBU agreed to withdraw its planned action, rail crews would be able to return to work.

Key sticking points in negotiations over the new EA have been about travel conditions, which will require workers to transport themselves to and from shift start and finish points which re up to 120km away from home, and pay cuts.

Pacific National said its customers were asking for more competitive pricing and increased flexibility to meet their needs, and the proposed EA reflected “a fair and sustainable balance between our employees, the business and our customers”.

RTBU was not available for comment as this article was uploaded.