OPERATIONS at two Wimmera pulse facilities, EAT Group and Wimpak, are expanding as the region prepares to harvest one of its biggest pulse crops.

Strong demand for its products for the human-consumption market mean EAT Group is already looking to ramp up from its initial capacity of 2500 tonnes per annum.

“Construction of line two will start early 2021, which will double the capacity of this site,” EAT Group co-founder and executive director Phil McFarlane said. 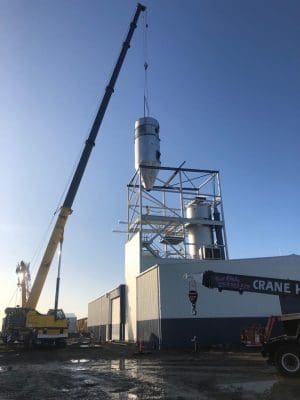 Faba beans will primarily be used initially by EAT Group, and supply looks to be ample now that the New South Wales drought-feed  market which absorbed much of eastern Australia’s production last year has disappeared with the improved season.

“We have stacks of faba beans etc. around the Wimmera so we are okay at least until mid-next year at this stage.”

North of Horsham at Minyip is the Wimpak site, which has just started a significant upgrade due to be completed by the end of February.

Wimpak was formed in Minyip in 1998 by local farmers and investors looking to add value to locally grown commodities through cleaning and packing with a focus on pulses, and ETG Australia bought Wimpak last year.

The expansion will include 4000 tonnes of vertical storage, a drive-over pit and intake system, and a new inline cleaning facility and container-loading operation.

“This expansion is a game changer for the operation as it will streamline all aspects of the yard operations, making it a better and quicker place for growers to deliver,” Wimpak general manager James French said.

The expansion will give Wimpak a total of six unloading points and three drive-over pits, and a new Leith Engineering shifter.

It will enable container loading to be done at the back of the Wimpak site, meaning containers will not have to enter the main area of the yard, or come over the weighbridge.

“These two factors will result in a large increase of volumes to supply ETG-owned mills in Bangladesh, India, UAE and global third-party customers.”

ETG is active in more than 30 countries on multiple commodities, and has supply chain operations in Africa, Bangladesh, Canada, China, Commonwealth of Independent States, India and the Middle East.