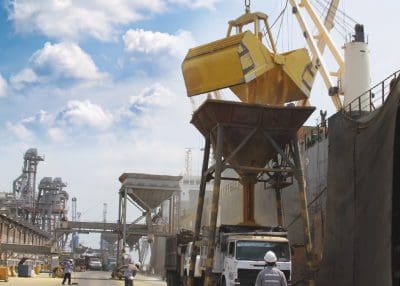 THE FIRST bulk shipment of corn dried distillers’ grain with solubles (DDGS) is booked to berth in Brisbane next month, and others for coming months are already planned, according to trade sources.

It marks the opening of the next chapter in Australia’s drought-feeding saga, and is allowing feedlots, dairy farmers and stockfeed millers to formulate rations containing an historically low amount of cottonseed.

This is a function of the drought’s impact on cotton production, with the crop about to be picked forecast by Cotton Australia at 600,000 bales, the smallest since 2012, and well below the near-record 2018 crop of 4.6 million bales picked in 2018.

This comes at a time when Australia’s cattle-on-feed numbers are at a near-record high, and paddock feeding of sheep and cattle continues across south-eastern Australia to counteract the effect of drought on pastures.

Integrated Animal Production nutritionist Rob Lawrence said the inclusion rate for cottonseed in rations has dropped as feedlots mete out what they own or have booked for the 12 months from April, when new-crop seed has traditionally become available.

“Inclusion rates for cottonseed have been 10 or 11 per cent, and they’re now less than 6pc, or as low as 2pc in some cases,” Mr Lawrence said.

“They’ve stretched their inventory by reducing the inclusion rate; if what they had was going to last till June, now it will get them through to January 2021.”

“If we get some more rain, then anyone sitting on cottonseed will sell it and buy cows instead, so there may be a freeing up of cottonseed.”

“It’s the only commodity that contributes to effective fibre which stimulates rumination; cottonseed increases fibre and gives you more energy.

“The protein is there as well, but traditionally, the feedgrain meets the protein requirement.”

Prospects for a big cotton crop in New South Wales and southern Queensland disappeared in October, the key planting month, when the dryland area remained bone dry and irrigation allocations were largely non-existent.

This has lifted the price of new-crop cottonseed ex gin to more than $700/t, compared with an average price in medium to large crop years of $250-$280/t.

The dwindling supply of cottonseed, more than the high price, has prompted an upswing in demand for canola meal from NSW crushers, and for imported soybean and copra meal and palm-kernel extract.

Trade sources have told Grain Central that around 10,000-15,000t of corn DDGS from the US is due to arrive in Brisbane next month, and follows on from around 18 months of containerised imports of the commodity to Brisbane and Melbourne.

A spokesperson for the Department of Agriculture, Water and the Environment today advised there were currently five valid import permits for DDGS, either bulk in container or bulk in ship’s hold, and it was currently assessing two applications for DDGS.

The price is believed to be around $530/t delivered to Darling Downs feedlots, compared with around $580/t delivered for canola meal, which remains the preferred option for a number of feedlots.

“The NZ feed test is a bit different to Australia’s and puts corn DDGS at 32-34pc protein, whereas drycake out of Dalby is more like 37pc, but it’s not fully rumen-degradable,” one source said.

“Corn DDG is going to be higher utilisation.”

Available tonnage in the February-March market for all meals is said to be tight, and feedlots and stockfeed millers are now weighing up prices, and specifications for each type of meal available, to formulate a ration to get them through the coming months.

Wagyu feedlots are believed to be among those which are sticking with higher percentages of cottonseed to ensure fat is of a white rather than yellowish colour.

Sources have said the Brisbane FOT market looks like it will replicate the New Zealand market for US corn DDGS exports, and if prices stack up, it is likely to be active at least until the end of this year.

According to a September 2017 US Grains Council report, New Zealand imported 113,000t of US DDGS between September 2016 and July 2017, up significantly from the 37,000t imported in the previous corresponding period.

“While this market is currently small, these sales represent the potential for demand growth,” the report said.

Trade sources have said inclusion rates of vegetable oil could now be ratcheted back because the commodity’s price has risen from around $950 per tonne in December to more like $1280/t now.

“Guys with infrastructure to store it are looking at vegetable oil, but that’s under serious pressure,” Mr Lawrence said.

“Even in the past three months, it’s increased by $300/t, and we’re competing on palm oil and recycled oil going to biodiesel.”

The global price hike is being attributed to China’s drop in oilseed crushing caused by its reduced demand for meal in the wake of the African Swine Fever epidemic which last year slashed its national pig herd.

“It’s great to have another option.”

Mr Rowland said poultry, pig and cattle feeders were all reformulating their rations to look for least-cost inputs to provide the required nutrition now that cottonseed use had dropped to minimal levels.

“What we have seen is the increase in use of used cooking oils.

“What we need to be careful of is that they are recycled to rendering standards.

“We are hearing of some oils coming on to the market that are not.”

Mr Rowland said oil should come from Ausmeat-accredited suppliers, and the vendor declarations forms issued by industry bodies like the Australian Lot Feeders’ Association, or grain organisations like Grain Trade Australia, should accompany each input purchase.

He said advice on ration formulation should be sought by animal feeders large and small.

“Everybody needs to ask for advice.

“This is a complicated playing field we’re on at the moment.

“Don’t look at price alone; you need to look at crude protein too.”