US wheat plantings set to be lowest on record, soybean highest

THE latest USDA report into prospective United States crop plantings has forecast the country’s planted wheat area will fall to 18.7 million hectares (Mha) in 2017, the lowest since record-keeping began in 1919. 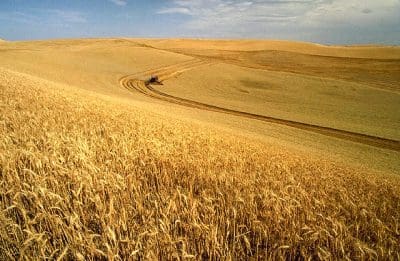 US wheat area is the lowest on record. (Photo: USDA Agricultural Research Service)

The report is based on data collected from farmers in March, and puts the total US area for winter and spring wheat varieties and durum at eight per cent below the area sown to wheat in 2015/16.

On the flipside, the soybean area forecast for 2017 has hit a record high of 36.2Mha, up 7pc on the 2016 area, reflecting planting intentions being up or unchanged in 27 of the 31 estimating states.

Areas planted to canola, peanuts and lentils are also forecast to increase, while reductions are forecast for corn, down 4pc from 2016, as well as sorghum, oats, barley, sunflower and rice.

The cotton area is also forecast to rise, up 21pc to 4.9Mha, on the back of a strong outlook for prices and an end to drought in some key areas. 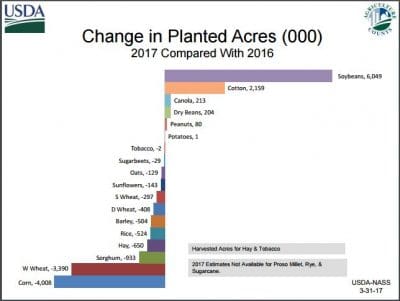 Co-principal of pool operator AvantAgri, Malcolm Bartholomaeus, said the drop in US wheat area was likely to have little effect on global prices while stocks remained high.

“It’s a pretty small acreage in the US, but the USDA stocks report shows those reserves hadn’t reduced as much as was expected, and we’re going to need more than reduced acreage to pull high stock levels down,” Mr Bartholomaeus said.

“The situation with wheat is that the low price problem won’t get fixed until there is a production issue in the Black Sea region; it’ll be increased exports out of the United States rather than reduced acreage that will allow wheat values to drift up.”

Mr Bartholomaeus said price signals were definitely telling growers to increase oilseed areas at the expense of cereals, and that might put some price pressure on soybeans.

“That shouldn’t affect canola prices too much, because stock levels in canola will get tight, and rapeseed area in Europe is not expanding due to herbicide issues.

“Rapeseed/canola is not in oversupply. We might be looking at a price fall in canola year-on-year in Australia, but it will be limited.”