ABUNDANT exporter supplies are expected to create increased competition for market share in the 2020-21 global market, despite projected record global demand, according to the May USDA World Agricultural Supply and Demand Estimates (WASDE) report released overnight.

The report contains USDA’s first look at 2020-21 (July-June) global wheat production, and says Argentina is again expected to have large exports based on expanded area.

It forecasts Australia to have its largest crop in four years, and reduced domestic feedgrain demand caused by improved pasture conditions.

“As a result, Australia is likely to regain its place as leading supplier to South-East Asia,” the report said.

Canada is projected to have larger production and another year of strong exports which will provide direct competition with US wheat in key Latin American and Asian markets in contrast to 2019-20, when exports were periodically constrained by logistics bottlenecks.

Conversely, exports from the European Union are forecast to plunge as a result of a much smaller crop, and reduced wheat availability and large global corn supplies will lead to a decline in the use of wheat for animal feed.

“Tighter EU exports are likely to benefit Russia the most of all the major exporters.”

After a year of lower-than-anticipated export levels, Russia will regain its place as the world’s leading wheat exporter with another bumper crop.

Its exports will likely be competitively priced and move rapidly in the first half of its marketing year, potentially limiting competitor shares from July to December.

In addition to this year’s near-record crop, India maintains an immense amount of domestically grown wheat stocks, accumulated over many years due to its steadily increasing minimum support price (MSP).

“Indian wheat exports are seen as limited due to uncompetitive prices, but are expected to increase to neighbouring countries.”

Demand for Kazakhstan’s wheat in neighbouring countries has been growing and exports are likely to rise depending on COVID-19 related quotas put in place until September to ensure domestic food security.

A fair portion of Ukrainian wheat is used for feed which can be substituted for corn and barley feed, depending on price.

US wheat exports are projected lower as increased competitor supplies will reduce demand for US wheat in price-sensitive markets.

Export prospects to China have improved since the Phase One Agreement entered into force as several 2020-21 sales were made earlier this year.

COVID-19’s impact on wheat demand has varied according to each country’s culture, economic development, and consumption patterns, and the report said these impacts have been taken into consideration in its global wheat projections.

“At the micro level, the pandemic has created a consumption shift, with reduced commercial demand in restaurants and hotels as a result of social-distancing practices and limited travel.

“On the other hand, retail demand has increased with a shift from dining out to home-prepared meals.

“Globally, some producing countries are showing stronger demand for wheat products as consumers revert to bread and pasta as key staples.

“Alternatively, demand in other importing countries is negatively impacted by economic slowdowns resulting from reduced tourism or a shift to other staples such as rice.”

“While trends have varied by country, USDA data currently shows that the COVID-19 impact on overall global consumption of wheat for food use has been minimal to date.”

Russia’s wheat prices rose slightly as export restrictions continue as a result of COVID, while  EU prices fell to make them more competitive with Russia.

US wheat prices also declined, pressured by expectations for large competitor crops, and Canada’s prices dropped even further on expectations for a large crop and easing transportation logistics.

Canada’s (CWRS) prices are currently at a rare discount to US HRW.

Australian prices rose to a one-year high during April as supplies tighten seasonally, and Argentina’s prices were pressured by a weakening currency and generally good planting conditions for its 2020-21 crop. 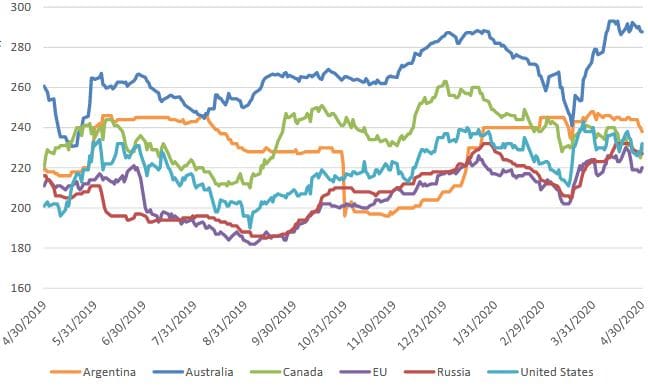 Global corn production in 2020-21 is projected to rise, primarily driven by a recovery in US area.

Major exporters the US, Brazil and Ukraine are all projected to have record crops, while Argentina has another near-record crop.

Global production is forecast to exceed consumption for the first time in four years, and feed and non-feed use are expected to grow under exceptionally low prices, spurring expansion in global trade.

Ending stocks are projected to rise as the US is set to have its highest ending stocks since 1987-88, offsetting a decline in China.

These have since had timely rain.

Accelerated  spring  growth  has  stalled  with  a  pattern  of  cooler temperatures  that  has  slowed  crop development.

Potential winter-wheat yields will hinge largely on weather during this and next month.

Europe’s harvested wheat area  is  estimated  to  be  its lowest  since  2007-08 due to challenging planting conditions  in autumn  in  north-western Europe including the  UK, which is looking at its lowest wheat area since 1978-79.

France, the largest wheat-producer in Europe, is looking at its smallest wheat area since 2001-02.

A dry autumn in south-eastern Europe affected planting, while soil-moisture conditions in Spain since November have been exceptional, bolstering record production expectations.

Winter  throughout  Europe  was  very  mild, and current yield  concerns  centre around  dryness  in central Europe. For 2020/21, global wheat production is forecast up with larger crops in most major exporting countries.

Production for Argentina, Australia, Canada, Kazakhstan, and Russia is forecast higher than the previous year.

Overall consumption is up with larger Food, Seed, and Industrial (FSI) use more than offsetting reduced feed and residual use.

Food consumption continues to rise due to population growth and changing diets, especially in developing regions of Asia.

Feed use is expected lower this year as wheat prices are expected to be less competitive with corn.

Consumption, production, trade, and stocks are all forecast to reach records, with China still expected to represent more than half of global wheat stocks.

Global production is forecast at a record 768 million tonnes (Mt), up more than 4 Mt from last year.

Production among the top eight exporting countries is projected up a combined total of nearly 3Mt.

Global wheat consumption is projected at a record, driven by food, seed and industrial (FSI) use.  FSI consumption makes up more than three-quarters of wheat use and consistently trends upwards over time with population growth.

Growth is particularly significant in South and East Asia, based on rising food use in India and China.  Food consumption in the Middle East and North Africa is also stronger with growth seen across many major markets.

After several years of strong growth, food use in Sub-Saharan Africa and South-east Asia is expected to grow at a slower rate in the coming year with weaker economic growth.

In 2020/21, feed wheat use is expected to decline with higher prices relative to corn.

Wheat feeding in South-east Asia, Canada and the US is projected to decline, largely because of abundant supplies of corn. 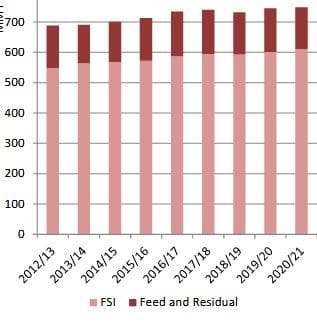 Food use of wheat continues to increase. Feed will decline this year (million tonnes). Source: USDA

Global wheat stocks are projected to reach another record with China accounting for more than half of the total.

Combined wheat stocks for the top eight global exporters are projected up slightly from 2019-20, an estimated six-year low, with US stocks forecast to represent nearly 40pc of this total.

Global trade is forecast to rise 2pc to a record 187Mt, with stronger demand expected across several regions.

“Consumption continues to rise with larger imports needed because of lower projected production levels in Algeria, Morocco, and Tunisia.”

Egypt is again forecast to be the world’s leading importer and is forecast to match its record 2019-20 imports.

A decline is expected for the Middle East, primarily driven by Turkey.

However, production continues to exceed consumption, resulting in rising stocks.

Sub-Saharan Africa remains a significant importing region as the majority of consumption is met through imports.  After a few years of major growth, its imports have leveled off in the last few years.

A decade of exponential import growth has resulted in Indonesia becoming the world’s second-largest wheat importer with a preference for Australian wheat for noodle manufacturing.

The Philippines has also seen long-term import growth as wheat has become an integral feed ingredient.