WORLD markets are currently blanketed by a cloud of uncertainty around Ukraine’s ability to export corn and barley in both the short term and the coming year.

Though not a major exporter of corn, Australia is one of the world’s top exporters of barley, and, with its ample production forecast in 2021-22, could benefit from a perceived global deficit in feedgrains.

Australia barley production for 2021-22 is currently estimated at 13.7 million tonnes (Mt). This level of production, if realised, would be a record, beating out the previous high of 13.5Mt in 2016-17.

As a result, exports are forecast at 9Mt, a near-record.

Australia barley is currently the least expensive among the major exporters. Moreover, when export prices for corn and barley are indexed to values as of January 1, 2020, Australia barley has also experienced the least dramatic price increase. 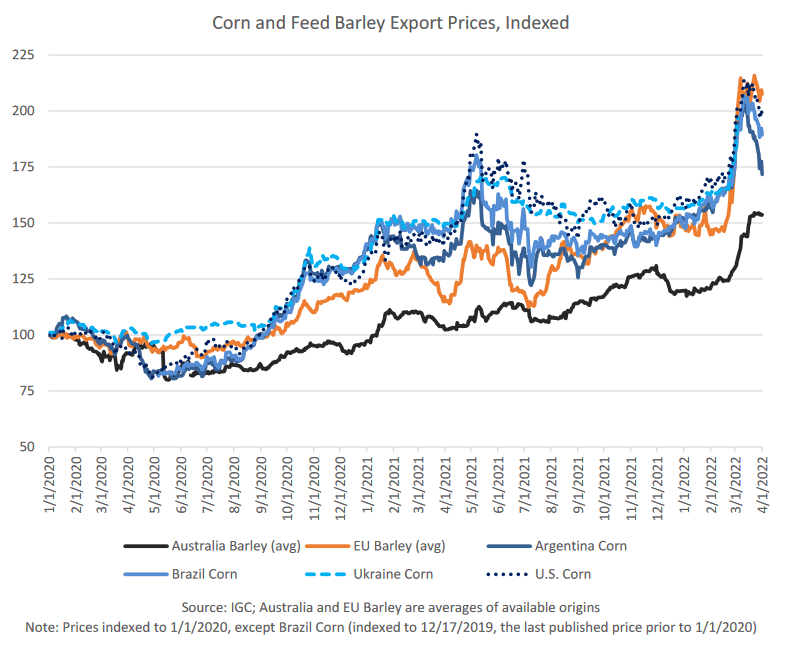 Though Australia barley was not immune to these movements, the change was muted in comparison to corn and other barley origins.

China is the world’s largest importer of barley and Australia was its primary supplier leading up to the duties.

Since then, Australia barley exports to China have been predictably small.

However, Australian trade with Saudi Arabia strengthened significantly last year as barley exports reached 3Mt from just 66,000t in each of the two years prior. 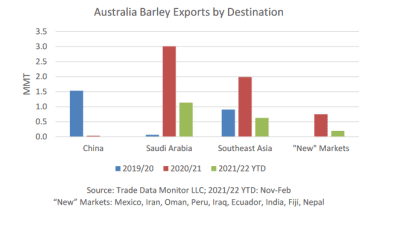 Marketing year to date in 2021-22, exports to Saudi Arabia are slightly behind last year.

Though Australia has already diversified its export markets away from China, current attractive prices and ample supplies could reopen interest during this time of uncertainty.

China has been the key driver in global import demand for major coarse grains, namely corn, barley, and sorghum, since becoming the top importer of corn last year.

China’s customs data for the first five months in 2021-22 (Oct-Sep) shows combined imports of coarse grains at the same level relative to a year ago as larger volumes for barley and sorghum offset the decline in corn.

Corn imports totalled 8.1Mt for the period, supplied by the US on 51pc, and Ukraine on 45pc.

The import volume for Ukraine corn was on par relative to a year ago, but US corn fell behind last year’s record pace. 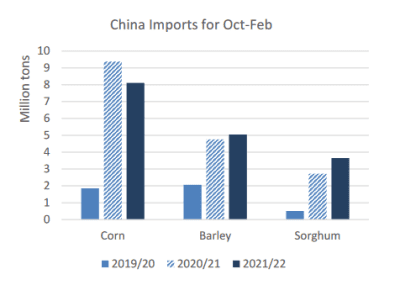 For March through September, imports from Ukraine are expected to be small as the ongoing conflict severely limits Ukraine’s ability to transport the grain from the Black Sea.

This month, the China corn import forecast is adjusted lower to reflect this, with Ukraine a major supplier to China since 2014-15.

Imports from France were up sharply, more than offsetting smaller volumes from Ukraine and Canada.

Barley has been used in China’s domestic beer industry and as a substitute for corn in feed rations in southern provinces.

In the coming months, imports are expected to be slow from Ukraine and Canada.

Canadian Grain Commission data shows a slowdown in weekly shipments to overseas destinations for the past several weeks.

Given that the drought last summer decimated the crop in the Prairies, the slowdown likely indicates that the export program is near the end for the year.

China has been the top destination for Canada.

Sorghum imports totalled 3.6Mt, supplied by the US on 52pc, Argentina on 36pc, and Australia on 12pc.

China’s customs data indicates that unit values from the Southern Hemisphere origins were US$14-23/t cheaper relative to US sorghum.

The impressive growth in volumes from non-U.S. origins may also reflect China’s effort to alleviate dependence on US sorghum.

The import forecast remains unchanged this month, as the five months of data are supportive of the current forecast.