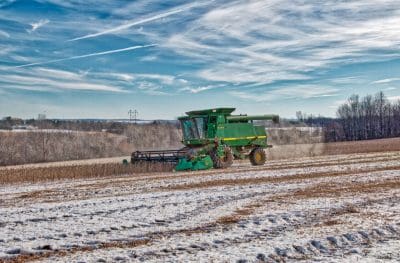 The US summer crop was very late last year due to a wet start, and some growers were harvesting soybeans in the snow. Photo: Farm Credit East

THE January World Agricultural Supply and Demand Estimates (WASDE) report tends to be significant, given it usually holds the final numbers in terms of yields, harvested area and production for the crop year in the United States.

Heading into last Friday’s report release, much of the market chatter suggested that the report would be bullish, based on the expectation of lower summer-crop yields.

The opposite happened, with the USDA raising the national yield for both corn and soybeans.

US corn production was forecast at 347.7 million tonnes (Mt) with an average national yield of 10.55 tonnes per hectare, slightly higher than last month’s yield estimate of 10.48t/ha.

The only production increase among the major exporters was Russia ,which the USDA increased by 500,000t to 14.5Mt. The wash-up of all the changes was an increase in global output by a little more than 2Mt to 850Mt excluding China, and 1111Mt including China.

The bullish part of the corn equation comes in the demand number, up by more than 6Mt globally compared with the December report’s figure. The US accounted for just under 6Mt, with a 1Mt increase in China countered by a 500,000t decrease in Ukraine, and several other minor downward revisions.

This was a surprise to most analysts, who expected to see the impact of the extremely challenging season continue to ripple through the country’s soybean supplies. Nonetheless, this is still 20 per cent lower than the previous season’s production of 112.5Mt.

Eventually, soybean losses will happen if it remains dry, but most agronomists believe the current lack of moisture only affects the first corn crop at this point in the season.

The state raising the biggest concern is Rio Grande do Sul, the top summer-corn producer in the country. Conab maintained its estimate for first-crop corn production at 26.6Mt, 3.8pc below the 2019 crop, and based on a 1.1pc increase in the seeded area.

Global wheat production for the 2019/20 marketing year was reduced by a meagre 1Mt to 764.4Mt. Half of that decrease was in Australia, where the USDA decreased production by 500,000t to 15.6Mt. While this is getting closer to reality, it is still at least 1Mt higher than most domestic estimates.

Argentine production remained at 19Mt against the latest Buenos Aires Grain Exchange (BAGE) estimate of 18.8Mt. BAGE increased their estimate by 300,000t last week on the back of better than expected yields in the late-harvested regions.

The balance of the global production decrease was in Europe with the Russian crop decreased by 1Mt to 73.5Mt and the European Union (EU) crop increased by 500,000t to 154Mt.

The US, Argentine and Canadian numbers were all unchanged compared with the December report. The major tweaking was in Europe, where the Ukrainian and EU export numbers were increased by 500,000t and 2Mt respectively, and the Russian forecast was decreased by 1Mt on the back of lower supplies.

The USDA adjustment to the Australian wheat export number was hardly worth the token effort, with a mere 200,000t shaved off expectations.

Like the production forecast, the figure of 8.2Mt is at least 1Mt higher than most domestic expectations, and it simply should not be possible given domestic demand and low harvest receivals in Western Australia and South Australia.

Looking at US new-crop, the USDA reckons their farmers have planted 12.47Mha of winter wheat. This compares with 12.61Mha last year, and is the smallest winter wheat area since 1909.

The net change to global demand was minor at 100,000t, but the USDA did make some quite hefty regional adjustments to arrive at total demand of almost 153Mt. The big one was a 900,000t decrease in Chinese demand, potentially decreasing Australian exports over the coming months.

Most importantly, Saudi Arabian demand was untouched at 8.5Mt, a year-on-year increase of 20pc or 1.5Mt.

All this leaves 2019/20 global ending stocks at just under 21Mt, down 1Mt on last season’s number.

It could be said that last week’s WASDE report was mildly bullish for wheat, barley and corn, but on the whole, it was quite underwhelming for a report that invariably has huge trade and market ramifications.