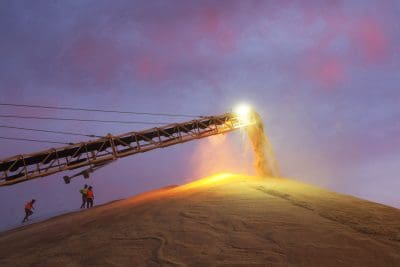 Putting grain in a bunker at a GrainCorp site in Victoria’s Wimmera region. Photo: GrainCorp

DELIVERIES to major eastern-states bulk handler GrainCorp have hit 3.44 million tonnes (Mt), with receivals in the week to 13 January of 171,524t in Victoria bolstering the figure.

The past week has seen no grain delivered in Queensland, and only 83t taken in in New South Wales, with harvest now complete in both states.

In its latest Harvest Update, GrainCorp said deliveries had slowed in western Victoria in the past week following some rain over the weekend, and more expected.

GrainCorp has advised some sites are now open by appointment only, and growers should contact local site or area manager for information.