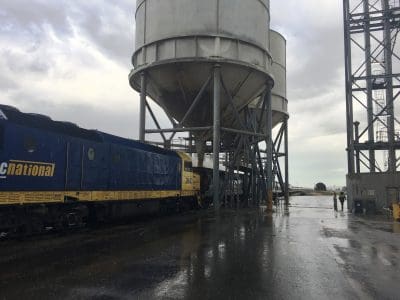 The train, loaded with barley at Viterra’s Bowmans site, is bound for New South Wales to supply feedlots.

“We have adapted to meet the needs of the domestic market with dry conditions, particularly on the east coast, increasing the amount of grain being moved to meet stockfeed and food demand.

“It has added a level of complexity compared to South Australia’s typically export focused market.”

Mr Hill said Viterra had done only “a handful of domestic trains” prior to the current drought phase.

“We have been working closely with a number of buyers and end use customers to ensure we are getting grain to the right place at the right time, which has been extremely important given the conditions.

“Buyers and end-use customers in NSW, Victoria and Queensland who traditionally purchase grain in the eastern states have become buyers in the Viterra system, and many have sourced South Australian grain for the first time.

“It has opened up new markets for South Australian growers, as well as adding to the already multiple buyers for growers to choose from in the Viterra system.”

Other sites had been busy as well, with increased road movements to South Australian and interstate customers, and shipping to east-coast and international markets.

“We are working closely with our grower customers in the lead-up to harvest to provide a valuable and efficient service, while also working with our buyers and end use customers to ensure domestic and export requirements are met.”