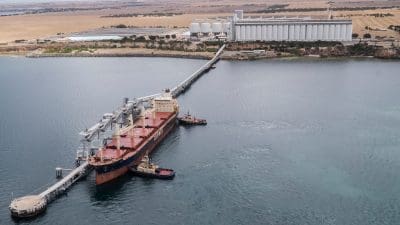 DELIVERIES to Viterra’s Australian network hit 3.9 million tonnes (Mt) on Sunday following a fortnight where 114,630t was received at 36 sites in and near South Australia.

Most deliveries occurred in the Eastern region, which includes Viterra’s two Victorian sites, as the end of the 2019/20 Australian winter-crop harvest approaches.

“The majority of deliveries into Viterra sites was grain from on farm storage, apart from in the south east, where receivals were from growers finishing up their harvest,” Viterra said in its latest monthly receivals report.

Larger sites in the Central and Western regions of South Australia, and many sites in the Eastern region, remain open, and Viterra has advised growers can make deliveries by appointment at selected smaller sites.

“We have had a busy two weeks loading five trains destined for the east coast.

“Our Gladstone, Snowtown and Bowmans sites have loaded the trains with wheat, barley and canola.

“Vessels have also been loaded at our Port Giles, Thevenard and Port Lincoln export terminals.”

In Viterra’s last Weekly Harvest Report issued on 22 December, Viterra said deliveries in its Central and Western regions had slowed, and both were busy loading grain for international and domestic markets.

“We loaded 90,000t of wheat and barley into three vessels out of our Port Lincoln export terminal,” he said.