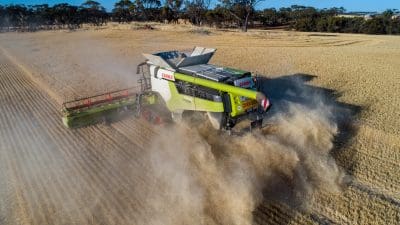 WESTERN Australian growers have delivered 7.2 million tonnes (Mt) of grain in the harvest to Friday, with 2Mt coming in during the past week.

“The smaller crop this year and good harvest conditions have seen growers moving quickly through their programs, with Esperance and Geraldton zones due to finish up within the next couple of weeks,” Mr Macnamara said.

“In some parts of the state, the small harvest has presented a challenge with how we manage the number of off-grades required for the full spectrum of crop quality that we are seeing.

“We have been proactive in introducing segregations at sites where needed, which combined with improvements to site storage, equipment and technology made prior to harvest, has made for a pretty smooth harvest so far,” said Mr Macnamara.

More fine weather is forecast for this week.

Fine weather over the past week, with more to come this week, means harvest in this northernmost zone is expected to wrap up quickly.

Several sites in the north of the zone closed for the season this week.

Shipping of new-crop grain from CBH’s Geraldton Terminal is starting this week.

Favourable harvesting weather saw Kwinana North post its biggest delivery week of the harvest in the seven days to Friday, with 392,000t going into the CBH system through its sites.

The quality of deliveries remains variable, and wheat, which is yielding better than barley, is now accounting for most of the receivals.

Three smaller sites in the Kwinana North zone closed last week, and more are expected to close this week as harvest winds down.

The larger sites in the zone were kept busy over the past week with 489,000t received across the zone in total in its biggest week to date this harvest.

Some of Kwinana South’s smaller sites are winding down, and two closed for the season last week.

CBH Group expects Kwinana South will be the last zone to close this season, as many growers still have weeks of harvesting in front of them.

WA’s south-western zone averaged intake of 80,000-90,000t per day of mostly wheat, with smaller amounts of canola and barley trickling in.

An increased percentage of barley deliveries are going into malting segregations.

The Esperance zone was around 80-per-cent finished as of Friday, with many growers due to finish harvest this week.

Deliveries are mostly wheat, with quality looking better than expected given the season.

Several sites are due to close this week, with most of the tonnes still to be delivered expected to come straight to CBH’s Esperance Terminal.

Table 1: Tonnes received as of 3am 29 November. Source: CBH Group

In the week to Friday, slow grower selling and traders looking to cover early shipments lifted the wheat market $7-$10/t for APW1 to $337-340/t free in store (FIS) Kwinana.

This has also seen spreads narrow, with ASW being only $5/t below APW1.

AH2 was trading at $2-3/t over APW1 last week, with the narrow spread reflecting a market where premiums are not being paid for protein.

Slow grower selling has been a feature of this season, with significant quality and yield variability resulting in growers being very cautious about committing grain.

International interest in wheat is good, with demand being seen from South East Asia for the first quarter of 2020.

The announcement from Thailand to not include Glyphosate as a chemical with an maximum residue level (MRL) of zero has assisted the market, with potential for additional business to be concluded for first half of next year.

In the feed-barley market, eastern Australian and international interest is being seen at current values, which last week sat at around $270/t FIS Kwinana.

Interest remains for malting barley, and with the selection of around 20 per cent being very low, pricing is reflecting demand for reduced supplies.

The bulk of WA’s oat harvest is expected to take place this and next week.