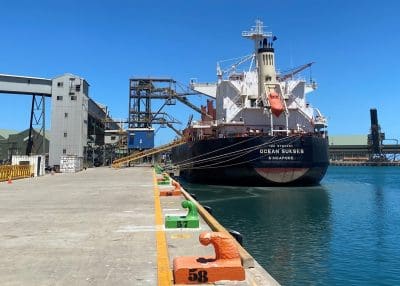 Wheat bound for the UAE loads in 2020 at Geraldton in WA. Photo: Mid West Ports Authority

WESTERN Australian bulk handler CBH Group is making additional export capacity available which will help satisfy global demand for grain as world markets come to terms with the impact of Russia’s invasion of Ukraine and what it means for export flows.

This beats its previous record of 15Mt.

“Another 500,000t of capacity is being offered to the trade this Friday,” Mr Tiller said.

A report in WA’s Countryman February 24 newspaper said WA grower groups had called on CBH, which operates four of WA’s five grain-export terminals, to ship an additional 1-2Mt of grain prior to Northern Hemisphere new-crop hitting the world market from July.

At AGIC Asia, Mr Tiller said the extra capacity was responding to additional global demand as well as the enormity of WA’s record crop.

“This, while being an outstanding number, also presents a significant challenge to market, and for the supply chain,” Mr Tiller said.

“This means export capacity is limited, so products compete for export and we are going to build stocks, especially in NSW and Victoria.” Eastern Australia’s exportable surplus from the 2021-22 crop has exceeded the shipping capacity in NSW and Victoria. Source: GrainCorp

ANZ head of Asia research Khoon Goh said shipping constraints created initially by the COVID-19 pandemic were being exacerbated by the invasion of Ukraine, and reactions from global markets in response to Russia’s aggression.

“What you’re going to see is further bottlenecks getting caught up, now that companies are not going to do business with Russia,” Mr Goh said.

“The implications of that are only starting to be felt.

“The bottom line is more potential disruptions, elevated freight costs, and unintended repercussions on what will flow through in coming days.

Mr Tiller said export buyers had initially thought there was “some time yet” before they needed to take positions for July-September shipment.

“As this war has evolved over the past seven days, we’re seeing a little bit of change in that sentiment.

“Our wheat buyers have been close to us…keeping firm tabs, but we may start to see that accelerate.”

Viterra’s Australian-based grains trading manager Simon Gellert said the market had already seen a change in buyer behaviour prior to the Black Sea being impacted by the conflict.

“The global consumer has been rewarded probably for the past decade for buying hand to mouth,” Mr Gellert said.

“With the current situation removing a key region, he may not be able to be as short term with his thinking and buying.

“I’ve never seen a year like this, where consumers have covered so far out, and that was happening already on where Australia was priced compared to other origins.

“I think this year we can expect to see that a lot earlier.”

Market intelligence indicates shipping of Russian and Ukraine grain out of Black Sea ports has slowed or stopped.

“I think what’s happening is unfolding to all of us; a full-blown invasion is on the way,” Mr Jester said.

“All ports have been closed; by now, there is no commercial traffic.”

“As long as this situation is ongoing, and with fighting on the streets and fighting close to the ports, I don’t think anything will change.”

He said that would take Black Sea supply out of the market “for the foreseeable future”.

“Most of these grains have been sold into neighbouring countries.

“I think it’s very difficult to forecast when this situation will change, and commercial traffic will start again.

“There will have to be a shift in origins which is extremely difficult in an already very tight market.”

Ukraine is the world’s biggest exporter of sunflowers, and Mr Tiller said the cessation of its ability to supply the EU oilseed crush under current circumstances could boost demand for Australian canola in the back months of its marketing year.

“That could be bringing renewed interest in canola in a typically dormant time from the EU crush market.”

On corn, Mr Jester said force majeure had already been declared on some Black Sea cargoes for destinations in China and South Korea.

“The main (corn) alternative will be South America and the USA, where we are looking at tight supplies already.

“For wheat, the problem is much bigger.”

Mr Jester said Asia had “very little commitment” to buy Black Sea wheat in the balance of this year.