WA groups at odds over access to grains stocks information

WAFarmers is pushing for growers to have equal access to grains stocks information that currently only grain traders receive from bulk handlers. 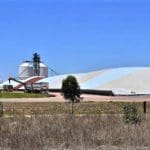 But PGA Western Graingrowers has condemned the move, claiming it will be a step back to re-regulating the wheat industry.

WAFarmers grains section president Duncan Young said that as traders already received aggregated stocks information on a weekly basis during harvest, producers should also be entitled to the data.

He said giving growers access to the information would give them better insight ahead of selling their grain, and would provide maximum transparency within the market.

“Given this, we ask why traders get grower information without growers also being offered the same data?

Mr Young said WAFarmers’ preference was a voluntary declaration of aggregated stocks information by bulk handlers, with growers then having the option to use this information or not.

“However, if they do not provide this information we are willing to look at regulation, though it is a last resort,” he said.

“WAFarmers understands CBH has decided to publish aggregated stocks information weekly on LoadNet for the 2017/18 season following significant feedback from growers, and we welcome this decision.”

Mr Young acknowledged that access to information was also an issue for the eastern states, given their significant domestic market and on-farm storage systems.

“Discussions surrounding annual reporting of on-farm grains stocks above certain levels are part of this debate, however have smaller consequences in WA compared to the eastern states given our strong focus on exporting, and their domestic market,” he said.

WAFarmers is engaged on the issue with GrainGrowers Limited and Grain Producers Australia which have been pressing the Federal Government to take action.

“The Federal Minister for Agriculture Barnaby Joyce will re-regulate the wheat industry if the two eastern states grower groups, Grain Growers and Grain Producers Australia, agree to it. Its 2012 all over again,” Mr McGill said.

“It’s disappointing but not surprising this move is on given Barnaby’s past.  At the 2012 Grain Industry Conference he publicly stated he supported the retention of the Wheat Export Authority (WEA) and bemoaned wheat de-regulation.  His colleagues past and present see a contestable market as a threat not the great benefit that it has become.

“Any stocks information in WA, whether it is that of the growers or CBH, is private.  A forceful display of this information publicly will disadvantage an iconic WA export industry.

“To add insult to injury the body granted these statutory powers will be funded by residual funds from the Wheat Special Account.  These funds were accrued from an export levy of 0.22c/tonne and generated mostly from the WA wheat export industry.”