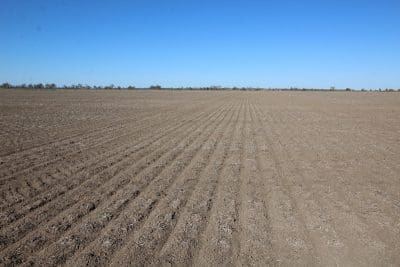 Vast areas of NSW and southern Queensland which normally produce wheat have no crop planted because of the current drought.

The latest monthly WASDE has chopped 2 million tonnes (Mt) from its previous forecast for Australia’s 2019/20 wheat production, which now sits at 19Mt, or 10 per cent higher than its estimate for last year’s crop.

The cut has factored into WASDE trimming its forecast for global 2019/20 wheat production to 765.5Mt from 768.1Mt last month at a time of year when most world wheat crops are mature or in the bin. 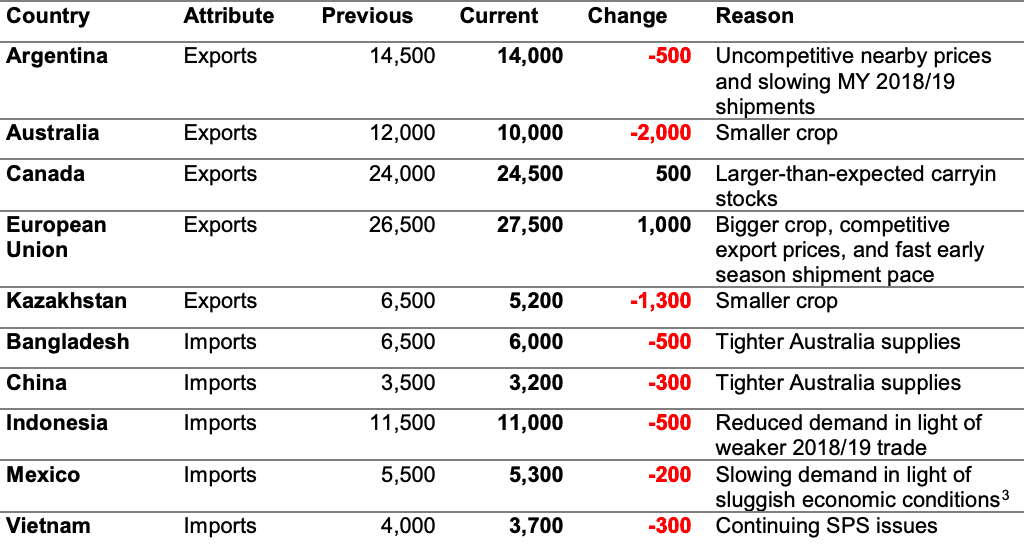 Forecast changes in wheat trade this month, lower imports and lower exports for most except EU and Canada. (‘000 tonnes)

Forecast wheat trade flows have changed as a knock-on effect of a bigger-than-expected crop in the European Union, up 1Mt to 151Mt, and smaller crops in Kazakhstan, down 1.5Mt to 11.5Mt, and Australia.

USDA’s forecast for the only other major southern-hemisphere crop, Argentina, which is still in its active growing stage, has remained at 20.5Mt.

Crops for Canada, the EU, Russia and Ukraine are larger than last year’s, which has contributed to sharply higher global production for 2019/20, the largest since 2008/09. 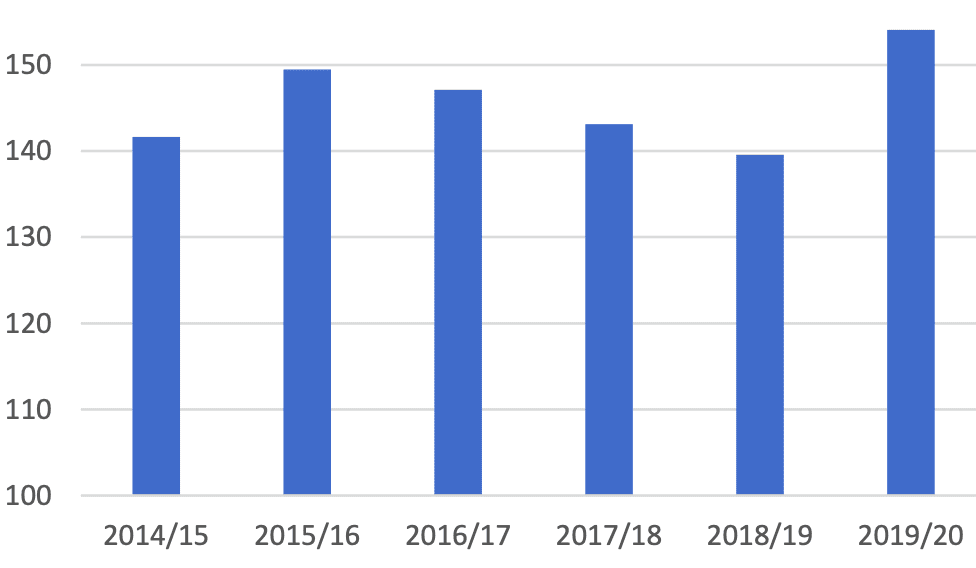 Harvest in the Southern Hemisphere countries, mainly Argentina and Australia, is still a few months away, and Australia’s prospects have been lowered this month.

Prospects of large exportable supplies have already driven export prices down 25 per cent, or US$60 per tonne, from one year ago. 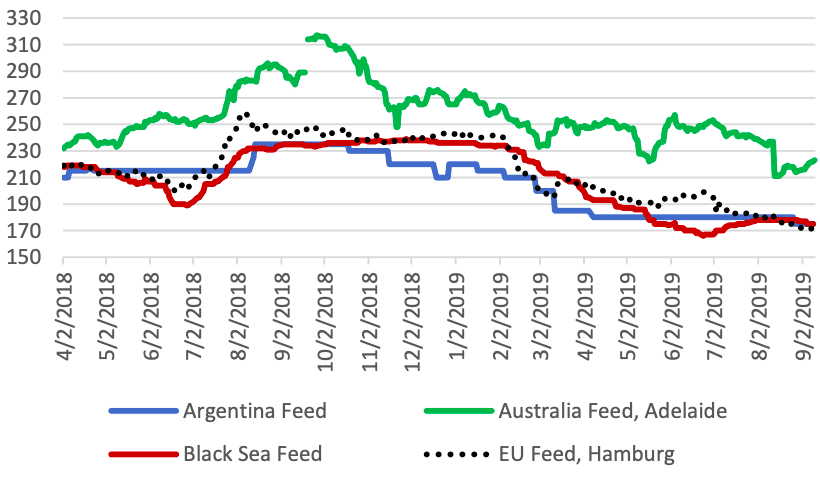 Feed barley price bids, US$/t fob. Australian price has been rising since mid-August, against the trend of other origins.

High barley prices in Australia are likely a function of current-crop expectations. Growth in import demand, nevertheless, is expected to be limited due to developments in Saudi Arabia and China, which jointly account for 60pc of global barley imports.

Saudi Arabia has been shifting away from feeding raw barley to using manufactured feed in feed rations to improve feed efficiency.

China’s imports from its top supplier, Australia, have slowed down amid its ongoing anti-dumping investigation, and any growth in feed use in China will likely be constrained by animal losses from African Swine Fever.

Moreover, abundant supplies of corn in the global market will also heighten competition in feed demand, as corn is priced much lower than feed barley, and generally considered to be of higher energy value in feed rations.

The Philippines is the world’s third-largest wheat importer, with imports more than doubling since 2013/14 as food and feed demand soar alongside its expanding population and developing economy.

The US continues to be its largest supplier, but imports from Australia, Ukraine and Russia have grown substantially. 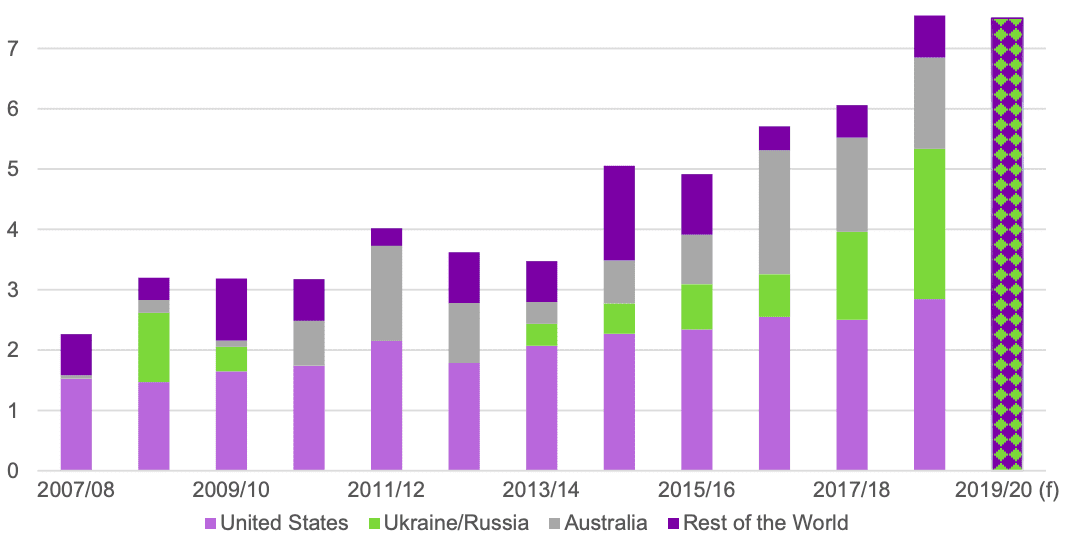 The Philippines wheat imports led by rising demand for food and feed wheat; the market share of Ukraine/Russia has increased the most. Million tonnes.

Consumption of wheat-based products, mainly bread and noodles, has surged in recent years.

A competitive domestic-milling sector, and changing tastes and preferences, have resulted in a gradual shift from rice to wheat consumption.

US.exports to The Philippines have not only benefited from growing demand, but also from reduced competition from Turkey.

Since 2014, anti-dumping duties on Turkish flour shipments have helped the US maintain a majority share of The Philippines’ milling market.

As the livestock industry continues to expand and modernise, imported feed wheat, in addition to domestically grown corn, has become an integral ingredient in feed rations. 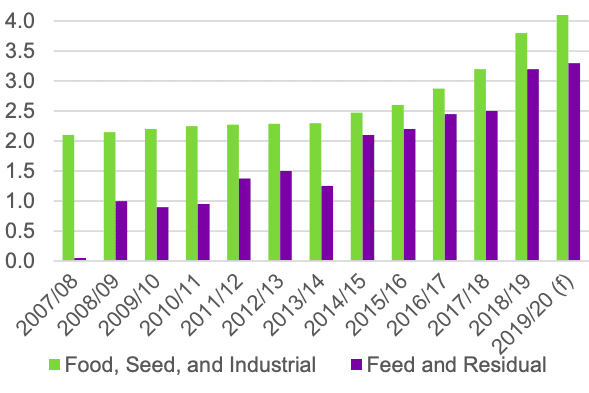 Both sectors of food and feed wheat usage in The Philippines are expanding. Million tonnes.

Since 2008/09, demand for feed wheat has nearly quadrupled, providing a growing market for lower-priced supplies from Ukraine and Russia.

However, rising regional concerns around the spread of animal disease have potential to impact feed imports.

This month, China’s supply-and-demand balance sheets for sorghum and barley have been revised to incorporate revisions by China’s National Bureau of Statistics (NBS).

In August, the NBS released revised area, yield and production estimates for sorghum and barley from 2007/08 through to 2017/18, based on its most recent agricultural census.

For the period, NBS revisions take away a cumulative 4.6Mt in sorghum production, and 2.3Mt in barley.

With substantial reductions in supply, total consumption in both categories – food, seed, industrial use as well as feed and residual use – have been adjusted down slightly, reflecting relatively strong demand at the time.

Ending stocks fall lower on smaller production and this relatively strong use.

The magnitude of the revision appears significant for both sorghum and barley.

However, the revision has little impact on supply and use for coarse grains (corn, barley, sorghum, oats, and rye) because corn is the largest and most commonly produced and used crop.

Sorghum and barley combined account for only about 2pc of coarse-grain production, and 5pc of use.