Maximus barley ready to harvest, but wet ground in the Victorian Wimmera will keep it on the plant a little longer. Photo: Ryan Milgate

THE PREMIUM for malting barley over feed has surged to reflect the wet end to the growing season in south-eastern Australia, and pull the market out of the doldrums seen since China imposed a trade-halting tariff on the Australian grain in 2019.

Speaking at the Australian Export Grain Innovation Centre (AEGIC) webinar on Thursday, it was one of the key messages to come through from three leading barley growers, and also from Ag Scientia analyst Lloyd George.

The webinar was the latest event hosted by AEGIC to keep Chinese maltsters and brewers in touch with Australia, which exported up to 3.5 million tonnes (Mt) per annum of malting barley to China prior to tariff introductions in 2019.

Entitled Quality of Australian malting barley: From producer to consumer, the webinar was held in the wake of what appears to be some diplomatic headway being made between the Chinese and Australian governments after a troubled few years.

In a Sky News article published on Thursday, Mr Farrell was quoted as saying his talk with China’s ambassador to Australia Xiao Qian had “a very positive vibe”.

“The relationship is thawing; we want a stabilised relationship with China and we’re determined to do it,” Mr Farrell told Sky News.

For market and quality reasons, Australia looks likely to be exporting modest amounts of malting barley, and feed markets in the Middle East and South-East Asia once again look like being Australia’s volume buyers.

Mr George said he estimated Australia was close to 25pc through its barley harvest, and of the 13.5Mt production forecast, domestic feed use is expected to account for 3.7Mt, and domestic malting use 1.3Mt.

“We’re expecting Australia’s barley exports will be about 8Mt, and that’s slightly down on last year’s 8.3Mt, but still very large barley exports in historical terms.”

“A lot of that actually went into Central and South America.”

“Clearly there’s going to be questions for those malting barley supplies for this year.

Those markets have emerged since China stopped importing Australian malting barley, and in the face of Canada’s drought last year which cut into its export surplus.

Australian malting exports of 1.3Mt appear unlikely to be repeated in 2022-23 because of the likelihood of colour-related downgrading on crops in south-eastern Australia, and a swing away from malting-accredited varieties in the two major exporting states, South Australia and Western Australia.

Soggy conditions in Victoria and New South Wales have already seen domestic maltsters scrambling for coverage, and Mr George said even in October, they were paying a premium over feed of A$60-$100/t for malting barley.

Since China ceased buying, the premium for Australian malting over feed has sunk to a low which is not expected to be revisited until domestic maltsters cover themselves ahead of 2023-24 new crop.

“Typically as harvest progresses through each year, there comes a point where domestic needs are satisfied and barley becomes barley and premiums disappear altogether.”

With premiums for the benchmark Planet barley still around A$100/t over feed on the east and west coast, domestic maltsters are bidding up big to get coverage.

“That means needs haven’t been satisfied yet and demand is still there.”

WA grower Lyndon Mickel farms at Beaumont in the Esperance zone, and told the webinar he has planted half of his area now being harvested to wheat, with the remaining country split between barley and pulses.

WA farms including his have had above-average rainfall this year and better-than-expected yields are common, but a switch out of malting varieties meant a surge in malting production was unlikely.

This is because growers, himself included, have planted reduced areas to malting in response to a preference for better-yielding feed varieties which are not at risk of downgrading, and do not require segregation.

Mr Mickel said he has this year grown two barley varieties, the malting-accredited Maximus and the feed variety Rosalind, and Rosalind has out-yielded Maximus by close to 750kg/ha.

“We are…seeing a trend where a lot of varieties have been grown as feed only and this is because in previous years we haven’t seen very big spreads between feed barley and malting barley,” Mr Mickel said.

Mr Mickel said growers’ input costs have nearly doubled in the past 12 months and, coupled with the paltry premium on offer for malting in recent years, feed was a better option.

“We have gone to predominantly feed only, where we do not have restrictions with segregations.”

While “excellent plumpness” can be expected in cereals, he said rain could adversely affect colour.

“As in WA, growers are shifting from Spartacus to Maximus.”

“Many growers are shifting to a different rotation entirely of 50pc wheat and 50pc lentils”.

Mr Barr said one third of the way through harvest, “yields are exceptional”, with barley averaging more than 5t/ha compared to the benchmark 3.4t/ha, and proteins are at 11pc.

However, he said malting barley as a proportion of the SA winter crop overall was dropping in response to the crop’s diminished premium in the past two years.

“That signal has been received loud and clear by growers and that’s part of the reason for the reduction in barley area.

“Without that premium, barley is less competitive.”

“From a growers’ point of view, China in our market is a very reassuring feature and the very low malting premiums in 2020 and 2021 are not good for the future of malt sowings in Australia.”

SA’s malting premium has shot up in recent weeks, primarily in response to the quality impact of rain on much of the New South Wales and Victorian malting crops.

“This year, the malting premium in SA has been $70-$100, mainly on concerns that domestic maltsters may not get the amount of barley that you’d think.” 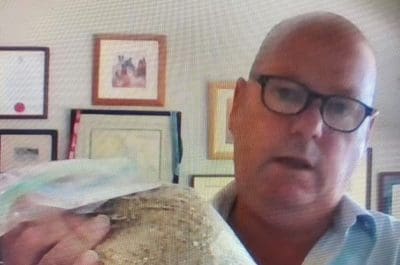 Simon Tickner shows the AEGIC webinar a sample of his just-harvested Maximus barley.

“I would flag that should be an ongoing concern for malting consumers, both domestically and overseas.

Mr Tickner said malting’s premium over feed needed to be bigger to attract not just growers but plant-breeding investment.

“We also have seen a vast change in Maximus taking over the role that Spartacus has played,” Mr Mickel said.

“You will notice a lot of old varieties have dropped off.”

Mr Tickner suggested small amounts of new varieties, Maximus included, could go into China for research purposes so “if and when trade resumes, we can hit the ground running.”

“I think it’s important to us as an industry that our Chinese consumers know what’s coming.

“I hope we’ll be able to meet in person and trade barley soon.”