Wheat values driven by supply side

WHEN it comes to agriculture across the globe, the name of the game is production, and global grain markets are definitely being driven by the production side of the equation at the present time. 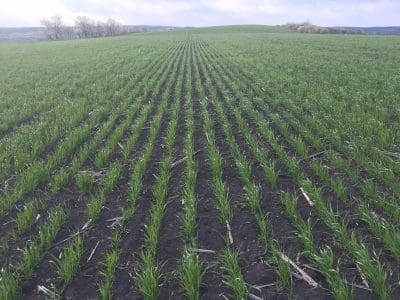 The wheat crop in Moldova is one of many in the Black Sea region to benefit from recent rain. Photo: Mike Lee

The northern hemisphere wheat crop is looking good on the whole.

At the moment, the crop is getting bigger rather than smaller.

That said, we all know it can all turn around very quickly, and it is still far too early to call the crop “made” or otherwise.

The one thing that really counts for wheat is adequate moisture during the grain-fill stage, and in the northern hemisphere, that generally does not occur this month.

The critical grain-fill months are usually June and July for the European wheat crop , and July and August for Russia.

If there is an issue in the US, it is the slow pace of the spring wheat-planting program due to too much rain and wet paddocks.

Last week the United States Department of Agriculture (USDA) reported the crop was 2 per cent planted against an average of 13pc for the date.

However, with much warmer weather on the way, no one seems to believe there is a danger of not getting most of the intended area in the ground.

The USDA reported that the winter wheat crop was 6pc headed versus 9pc average, and the crop rated 60pc good-to-excellent, unchanged from the previous week.

This is significantly better than the 31pc reported at the same time last year, and is the best rating in the past five years.

Winter crops across most regions of Europe have benefited from the predominantly mild weather conditions, and are advanced in their stage of development.

The crop is said to be in good shape, and production is expected to be significantly higher than last year.

Almost every European country is currently forecasting yields at or above the five-year average, with the exceptions being Bulgaria, Greece, Hungary and Slovenia.

In Germany, the country’s association of farm cooperatives (DRV) has forecast wheat production at 24.4 million tonnes (Mt), an increase of almost 21pc compared with last year’s drought-reduced harvest of only 20.3Mt.

Government agency FranceAgriMer estimates that 81pc of the French soft-wheat crop is in good-to-excellent condition, down slightly from 83pc last week.

FranceAgriMer has also given the same rating to both the winter and spring barley crops, which are down two percentage points week-on-week to 77pc and 89pc respectively.

All ratings are well above the same week last year.

The accuracy and credibility of Russian forecasts and estimates are always problematic, and none more so than last week.

Within 24 hours, Russia’s oldest agricultural markets and consultancy company SovEcon had raised its Russian wheat crop forecast by more than 4pc from 80Mt to 83.4Mt.

This was on the back of what is described as good conditions across a majority of the country’s cropping regions.

The SovEcon number is almost 12Mt higher than the current USDA forecast, and if it came to fruition, it would be the second-biggest Russian wheat crop on record, behind only 2017.

A crop of that size would mean at least 40Mt would be available for export, and could even challenge the export record of 41.3Mt set in 2017.

In South America, summer-crop estimates are definitely in bull mode, with local scouts increasing the size of the Brazilian soybean crop by 1Mt to 116Mt.

They have also increased the size of the Argentinian crop by the same amount to 56Mt.

The corn crops are heading in the same direction, with Brazilian production estimates increasing by more than 3Mt to almost 98Mt.

In Argentina, the government is forecasting a corn crop as high as 55Mt, and some analysts have suggested the South American corn crop will weigh 30Mt more than last year’s.

In China, there are rumours that the government may have sold down as much as 90pc of its reserve stocks of corn, and that temporary state reserves could be as low as 10Mt.

This probably explains why there have been no reserve auctions of late.

This will be music to the ears of US exporters, as the only thing that could change the burdensome US corn balance sheet at the moment is a substantial Chinese buying program to replenish reserves and attack the balance-of-payments deficit.

On global wheat, a rebound in northern hemisphere production, burdensome stocks in the US and relatively static year-on-year demand has turned it into a supply-driven market where the bears definitely outnumber the bulls.

The strengthening US dollar is also pressuring markets to the downside.

Global wheat values are unlikely to rally in the current environment unless there is a weather-driven problem in a major producer that severely impacts production, or prices get down to a level where the demand curve starts to rise again.