MOST farmers, or at least their parents, will remember the heady days of the late 1980s when there was a resurgence in wool prices.

In 1987-88, the Eastern Market Indicator for wool averaged 1117 cents per kilogram, a price level farmers would not see again for 23 years.

After the crash in wool prices in the early 1990s, wool fell out of favour for many farmers.

In the 1990s many farmers in Australia switched their enterprise mix away from wool into crop production, and sheep flock structures mostly moved away from wool towards sheep meat production.

Not just price differences, but a host of innovations and productivity gains encouraged the swing away from wool production.

Crop-variety improvement, no-till operations, larger and more efficient cropping gear, integrated weed management, the introduction of canola, adoption of dry sowing, and soil amelioration were but some of the many improvements farmers embraced in their pursuit of greater profits from cropping.

Those profits enabled a gradual increase in the size of farms, which further encouraged cropping underpinned by machinery-based economies of size advantages.

Have the price relativities between the major grains, like wheat, continued to support the switch into cropping and away from wool production?

Taking the example of Australia’s main grain, wheat, the answer is “no” (Figures 1 & 2).

Examining the price trends in the real prices of Australian wheat and wool suggests they are on different trajectories, with the real price of wheat continuing to decline whereas wool, in real terms, is becoming increasingly expensive and attractive, based on its price, as an enterprise option. 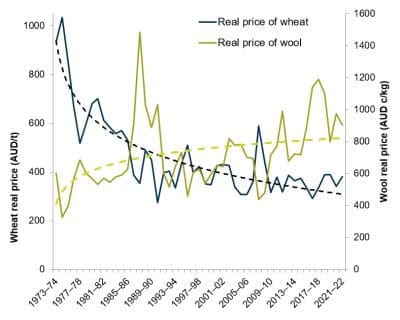 The practical ramification is that the productivity gains from wheat production are helping offset declines in the real price of wheat received by farmers.

By contrast, the heightened real price of wool is helping lift the profitability of wool production, despite its lesser productivity gain. 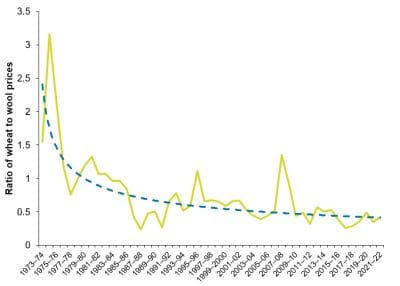 Figure 2: The ratio of the real prices of wheat versus wool, shown here since 1973/4, has been declining. Line of best fit is shown in blue. The ratio data point of each year is represented by the green line. Source: AEGIC from ABARES data sets in Australian Commodity Statistics (2020).

The upshot of these price relativities (Figure 2) is that although many farm businesses will remain crop dominant, the different price trajectory of wool and sheepmeat will cause many mixed-enterprise broadacre farm businesses to retain their sheep enterprises and not further embrace a swing away from wool and sheep production.