AUSTRALIA’S tough start to winter cropping this year comes at a time when offshore developments continue to push world market prices up amid mixed news of Northern Hemisphere crops.

Underpinning the upside for world wheat prices was the latest International Grains Council (IGC) outlook which saw global grain production as shrinking­­­, consumption remaining high, and the possible contraction of global stocks for the first time in five years. 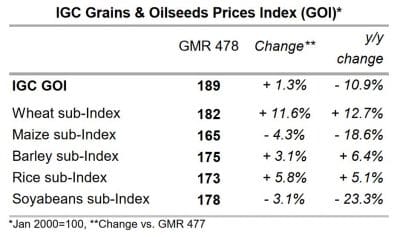 The IGC wheat prices index rallied almost 12 per cent in a month, being 13pc higher than a year ago, and was at its highest level since July 2015.

Canadian wheat growers, along with their US wheat-growing counterparts just south of the border in states including the Dakotas and Minnesota, have been forced by the weather into planting less wheat area than initially intended.

According to Statistics Canada (Statscan), which released its 2017 crops seeded area report last week, Canada achieved a first in the country’s plantings: a greater area of canola than wheat.

US wheat futures market price rises were further fuelled during the US Friday trading session by the United States Department of Agriculture (USDA) release of its monthly estimate of US crops area planted, which forecast a 9pc reduction in total US wheat plantings, the lowest since records began in 1919.

While this wasn’t exactly fresh news, the timing and significance of lower spring wheat plantings spilled into other wheat markets which traded substantially higher during Friday.

Acceleration of harvest pace in EU confirmed some yields compromised by dry weather, particularly in France and Spain, which lead the European Commission last week to revise downward its cereals supply and demand balance sheet for the next, 2017/18, marketing year.