GLOBAL DEMAND for wheat drove prices higher over December, according to the USDA January 2020 report released on Friday.

Optimism about trade potential was equally as important in driving price as was the long-awaited harvest outcomes of late 2019 amid unusually wet and unusually dry conditions in growing areas.

Table 1. Month-end US dollar fob major exporters’ wheat price. NB. The price in Argentina is based on 12.0% protein up-river quotes; Australia is the average of APW at Fremantle, Newcastle and Port Adelaide; Russia is Black Sea milling; EU is French grade 1 at Rouen; US is HRW 11.5% protein Gulf; Canada is CWRS 13.5% protein St Lawrence. Source: IGC

Export prices in Canada recorded gains of 12 per cent in December based on strong international demand for its protein wheats.

Australia’s prices rose 8pc in December based on tight supplies.

US prices rose more than 6pc, supported by advancements in trade talks with China which provided renewed optimism about potential sales to that market.

Prices in Argentina recovered almost 6pc during December based on strong export sales ahead of  the mid-month government decision to raise export taxes on wheat, corn, and soybean.

In addition to a strong pace of exports, EU prices also found support from wet conditions in western Europe.

Global wheat production is down with smaller crops in Russia and Australia more than offsetting larger crops in the European Union.

The 2019/20 forecasts captured the seasonal deficiencies which challenged wheat crops in Australia and Russia, offsetting them with a boost in EU wheat flour and products exports to 31Mt from the previous forecast of 29Mt (see Table 2).

The two right hand columns of Table 2 show USDA raised its forecast of global trade slightly in its January forecast compared with December. It forecast stronger demand from Turkey, the higher exports for the European Union and Ukraine more than offset the lower shipments from Russia. Table 3 has further detail.

The reduction in corn exports from the US would be balanced by greater corn export from Brazil, Ukraine and EU.

Large shipments of US sorghum to Mexico would increase US total sorghum exports to 3Mt in 2019/20. 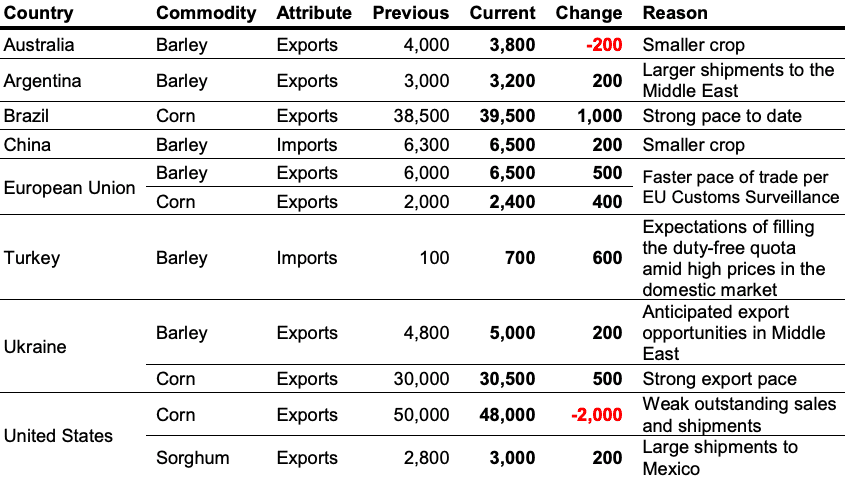