GRAIN cash bids have again risen this week as 2017 production prospects in Australia continue to deteriorate due to dry weather in parts of the grainbelt. 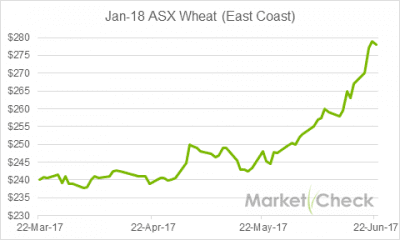 Market Check manager strategy and managed programs, Nick Crundall, said the poor start to the season had driven current and new-crop prices higher for all grains.

“The market is doing a very quick job of rationing demand for the back end of 2016/17, as this rally has very significantly dampened Australian export competitiveness,” Mr Crundall said.

Barley bid prices have stepped up with the combined impact of Australian conditions along with barley crops in Europe facing a critical period in grain-fill and maturity between June and August.

“I think the carry-out in grain is on farm; most of what’s in the system is sold. Growers will use it as a hedge for new-crop until it rains.”

He said growers with grain stored in silo bags would be well advised to get it into silos or sheds and fumigate it because export demand still existed, and protocols gave no tolerance to contamination from sources like mice and mould.