He succeeds Canadian, Tommy Warner, who has returned to parent company Agrium after four years in Australia to take up the role of head of international business, overseeing Agrium’s operations in Canada, South America and Australia.

Mr Clayton, 43, has served as Landmark’s southeast regional director for the past six years, covering Victoria, South Australia and lower NSW. He took up his new role during January, as part of a deliberate strategy by Agrium to put an Australian national back in charge of the Australian business.

Mr Clayton has worked with Landmark for 17 years, but engaged with agriculture in various forms for his entire life, growing up on his family’s farm near Coonamble. He has a well-balanced exposure across a range of farming and livestock sectors.

He is a director of wool handler, AWH, and has held directorships of numerous agricultural companies and organisations through his career. 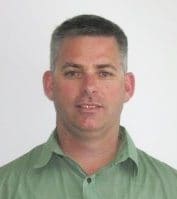 “Landmark’s focus in 2018 is to continue to make sure that we concentrate on what adds value for our producer customers,” Mr Clayton said.

He used Landmark’s approach to scaling-up investment in its livestock export business – at the same time as others are pulling out – as an example.

“We want to make sure that Australian producers don’t miss out on international markets for their livestock, by broadening demand,” he said.

Landmark has just completed its first shipment of slaughter cattle into the emerging China market, with a +2000 head shipment unloaded on Tuesday.

In other areas of Landmark’s business, Mr Clayton flagged the company’s recent partnership with Marsh Insurance, the largest broker in the world, which provides a strong platform for Landmark to expand its insurance business. In the fertiliser sector, the company in December made a $70 million acquisition in Western Australia, buying the Louis Dreyfus fertiliser business (click here to access story on Grain Central) bringing competition to bear on CSBP.

“Our plant nutrition focus through our Loveland products is going to be something that we continue to focus on, bringing world’s best practice to Australia,” Mr Clayton said. “The Loveland brand is all about sourcing the best plant nutrition products from all over the world, and formulating them for Australian market. We’ve seen huge steps forward in productivity through that range,” he said.

Mr Clayton said Landmark’s internal focus this year would be on its people – making sure it had the best people in agriculture, and then providing them with the best available technology to utilise.

“We’re buying back branches that were franchised earlier; buying back property that we earlier sold and leased back; we’re building new branches and fertiliser depots; and investing in complementary businesses, to build the Landmark business,” he said.

Focus an issues that can be controlled

Asked about the outlook for commodity prices this year, Mr Clayton said the focus should be on issues that were under industry control, rather than the ‘unknowns’ like currency movements or weather.

“What we can control is trying to help growers and livestock producers moderate production risk. But having said that, we’re also trying to enhance global demand and heighten competition, through strategies like enlarging our live export business.”

“What we’re about is controlling what we can control, and helping growers produce as much of their chosen commodity as they can, as efficiently as they can.”