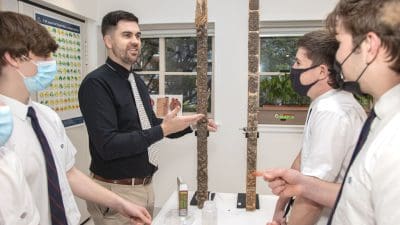 AN AGRICULTURE teacher at a Sydney boarding school has taken out one of the top awards at the Prime Minister’s Prizes for Science.

At an online ceremony, Scott Graham from Barker College won the Excellence in Science Teaching in Secondary Schools prize for his work reviving the agriculture program at the school.

In presenting the award, journalist Rae Johnston said Mr Graham had been successful in emphasizing the positive difference agriculture makes to society.

“Under his leadership as the Head of Agriculture at Barker College in New South Wales, student enrolments have tripled over the past seven years,” Ms Johnston said.

“The school has more than double the number of high school certificate agriculture students than any other school in Australia. Around 30 percent of those students have gone on to pursue an agriculture degree.”

In a promotional video for the prizes, Mr Graham said the agriculture subject was almost scrapped by the school before he started.

“Students didn’t have a clear understanding of all the opportunities in agriculture both rural and urban,” he said.

“One of our strategies has been implementing programs and methods of teaching to allow students to see the bigger picture of agriculture.”

Mr Graham said giving students an understanding of agriculture’s role in society was key to the school’s program.

“Whether it be in the area of food security or climate change and how agriculture deals with that,” he said.

“One of our strategies has been to maintain the academic focus of agriculture, so that we have more students following on to a career in agriculture.”

Mr Graham’s academic focus on agriculture has also led him to pursue a PhD looking at the way agriculture is taught in schools.

His supervisor is Emeritus Professor Jim Pratley, from the Charles Sturt University, who said he Mr Graham’s program was likely to create a model for other schools to follow.

“His passion for agriculture, agricultural science and technology and engagement with students and parents has helped students to achieve their best, including taking advantage of the many opportunities provided by a university education in agriculture.”