Federal Minister for Agriculture David Littleproud on farm in the Maranoa electorate.

A RATIONALISATION of projects within Australia’s research and development corporations (RDCs) and a framework in which Australian producers can be rewarded with premium pricing if they use exemplary stewardship are in the pipeline, according to Federal Minister for Agriculture David Littleproud.

In his address to the Australian Grains Industry Conference (AGIC) 2020 Live event today, Mr Littleproud said the government was looking into a “continued modernisation” of RDCs to ensure they delivered to stakeholders.

Mr Littleproud said he was working with Grains Research and Development Corporation and Council of Rural RDCs chairman John Woods on the matter, and looking at some “simple principles” for guidance.

“There’s also got to be greater collaboration and coordination of RDCs where there’s no duplication.” 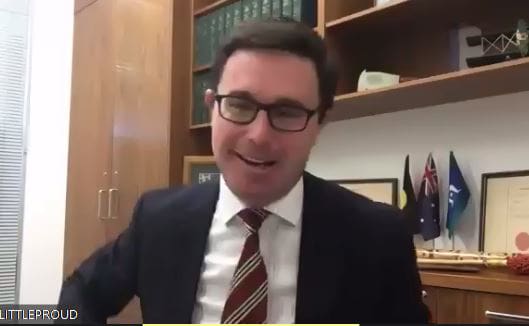 Mr Littleproud said in some instances three or four RDCs were undertaking research on one area at any given time.

Mr Littleproud said improved commercialisation was required to bolster the incomes of RDCs as government expenditure on them flatlined.

He said despite Australia having some of the brightest agricultural researchers in the world, it ranked 20th in the world for commercialisation, compared with the United States and The Netherlands at four and six which had same-sized research communities.

“What we need to do is try and commercialise the brightest in the world right here in Australia, but our commercialisation has been left behind.

Mr Littleproud said this would provide the next pillar of growth in agriculture.

“I’ve challenged the industry that we can be number one by 2050, but I think we can put the accelerator on that to get there by 2030, not with huge reform but with common sense and accountability.”

Mr Littleproud said commercialisation of R&D could help Australia achieve the target set by the National Farmers’ Federation of an industry worth of $100 billion by 2030 to bolster its income from production, which was seasonally dependent.

He said attracting young people to agriculture, including R&D and its commercialisation, was essential to help the sector advance, and said the provision of capital for young people was being looked at by government.

“We’ve lost a generation of young people out of rural and regional Australia and out of agriculture.

“We need to change that.”

Mr Littleproud said he wanted to look at nationally and globally recognised accreditation seal which would return Australian producers a premium which capitalised on commodities grown with biodiversity credentials, and gave provenance to food and fibre.

“The world is screaming out for this, and in Europe, they want this now more than ever.

“We are leading the world in this at the moment in moving toward this, and the window of opportunity for us to grab that is very narrow.

“Otherwise another nation will go past us.”

This would build on practises already being undertaken by some producers, and industry opportunities within the Agriculture Biodiversity Stewardship Program Fund announced last year, to create a marketplace for agricultural produce with environmental credentials including carbon abatement.

He said the Australian National University (ANU) had been engaged to look at harmonisation across states, as the government sought to find a way for farmers to be rewarded for their stewardship.

“I’ve asked ANU to have that methodology back to me by the end of the year, and in fact we will have a pilot going by March-April next year.”

Mr Littleproud said the government was trying to create a friendly investment environment through initiatives like the Climate Solutions Fund, and that a number of capital markets were “very interested” in investing in accredited Australian agriculture.

“My whole premise for this is about farmers being rewarded for stewardship of their land.”