HAVING peaked at $6.6 billion in June 2018, the national balance held in Farm Management Deposits (FMDs) has fallen by over $1.2 billion to a balance of $5.37 billion at the end of the March 2019 quarter, in a pattern that shows the FMD scheme is working as intended.

“FMDs are designed to allow producers to set aside pre-tax income in the good years, which is then available for use in the tougher times,” Mr Findlay said.

“Many producers have faced prolonged periods of drought, and associated record water and feed grain prices. The current FMD drawdown, while significant in terms of dollar value, is not surprising when you look at this broader context.” 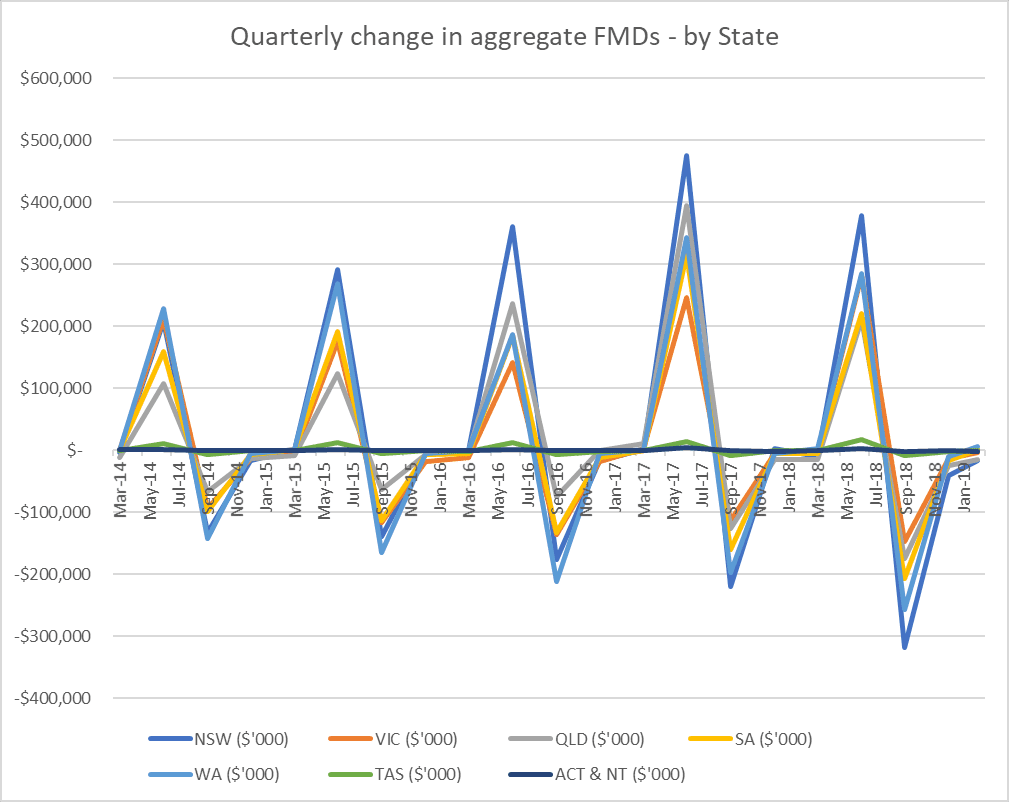 Data from NAB and the Department of Agriculture and Water Resources shows there are higher rates of withdrawal in drought affected areas, indicating producers are using FMD reserves to bolster their businesses.

Across all banks, a bumper 2018 grain harvest saw Western Australia record a $6 million increase in FMD balance from the December 2018 quarter to the March 2019 quarter, which was the highest of all states.

“The drought has been significant, but it’s encouraging to see that drawdowns have only been a small percentage of the total balance held, even in drought impacted areas,” Mr Findlay said.

“This suggests that many producers are saving their FMD reserves for a rainy day, to fund restocking or planting when the drought breaks. The FMD scheme is working, and it is a real positive for our industry.”

Looking ahead, NAB anticipates that tough seasonal conditions will lead to the typical pre-EOFY flurry of deposits being more subdued this year.

“We also expect to see a larger drawdown of FMDs at the beginning of the new financial year,” Mr Findlay said.

In July 2018, NAB announced that it would work to facilitate greater uptake of FMDs by offering agribusiness customers the financial benefit of being able to offset their FMD against their agricultural lending, in the form of a discount to their lending interest rate.

“As the end of financial year approaches, we encourage FMD holders to discuss their position with their financial advisers.”