Among the presentations were a number of projects with application in the cropping and grains sector which included:

Nxt Oil: an initiative that uses a technology to extract oil from plant leaves and stems – not just seeds – from a range of oil-producing crops, including soybeans, sunflowers and canola.

Nxt Oil’s James Petrie said the process greatly intensified the amount of oil that could be produced from plants.

“For Australian and global agriculture, what it means is we will now be able to address the increasing requirement for food oil the growing global population is putting on us, and the expansion of the middle classes globally,” he said.

“It also means we can address the other oil markets, particularly the energy sectors which are locked into the use of liquid fuel for the foreseeable future, such as aviation.”

Mr Petrie said while plants produced oil in their seeds, the patent-protected technology switched on the seed oil pathways into the rest of the plant.

“Now we have 30 to 40 per cent accumulation of oil in not only the seed, as you would get in canola, but also in the leaf and stems of the plants as well,” he said.

“This means the intensification of oil production is through the roof. We can produce phenomenal amounts of oil.”

Mr Petrie said while extracting the oil was relatively straightforward, the technical challenge was the storage of material over a long period of time.

“Seeds are fantastic at storing oil. We do have ways to make leaves as good, but there is still a little bit of work to do,” he said.

InFarm: an initiative that uses ‘drone to tractor’ technology to define the areas in a fallow paddock that need to be sprayed for weeds. It can be integrated into existing farm machinery.

InFarm’s Jerome Leray said the process used drones to take images of a paddock which were then uploaded into a processing platform where a unique weed identifying algorithm was applied. 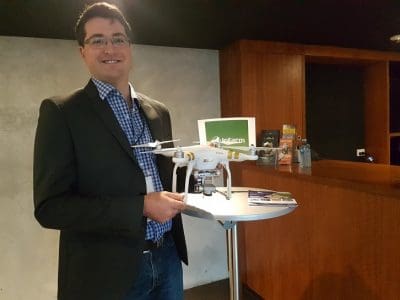 “The result is a tractor-ready weed file that can be uploaded into a standard, variable rate tractor by USB. The data controls the spray nozzles and turns them on and off depending on the presence of weeds,” he said.

“Our competitive advantage is not only that we are more cost effective than other (existing weed spot spraying) systems and can be used all year round, but we are providing a true ‘drone to tractor’ solution.”

Mr Leray said farmers were wasting hundreds of thousands of dollars a year on herbicides by spraying areas of paddocks that did not need to be sprayed.

“We can save farmers up to 80 per cent of their fallow weed herbicide costs by turning their every-day sprayer into a weed targeting machine,” he said.

“The average Australian farmer can spend about $30 a hectare per spraying, and will spray anywhere between two and five time a year for fallow weeds.

AccuSpray CEO Duncan Ferguson said the calculator was a platform for farmers to optimise their pesticide use and minimise spray drift.

“It allows the producer to put all the factors into the spray calculator, and it gives them an accurate measurement of the spray quality and drift potential.

Mr Ferguson said it was the only data set on the market that takes into account the whole tank mix.

“We have an individual grower app, a platform that individual companies can use and an algorithm that can be licenced to companies providing in-field solutions.”

WaterSave CEO Damian Zammit said the system used a mix of gateways and sensors that could be retrofitted onto existing solutions.

“It is plugged into a software platform. Farmers will view that, get live updates and operate it remotely,” he said.

“A practical example is when a farmer starts an irrigation set, his end of row soil sensors will notify him if a valve actuation needs to be closed. If the main section of the paddock is sufficiently irrigated, the valves then redirect the water accordingly.”

Mr Zammit said the system utilised a low power, wide area network. Each gateway communicates wirelessly with up to 1000 sensors which can be up to 15 kilometres away.

Because of the small data packages being transmitted, battery life is up to 10 years.