THE national BlockGrain roadshow rolled into Toowoomba this week to promote Agrichain Pty Ltd’s software, which is designed to increase the efficiency of Australia’s grain supply chain from harvester to consumer. 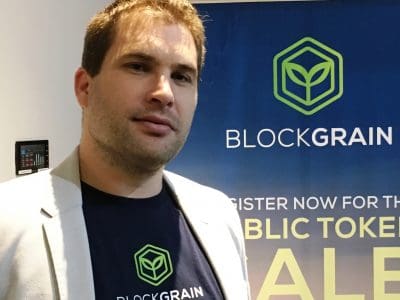 BlockGrain chief executive officer, Caile Ditterich (left), said the BlockGrain management platform was not trying to fix an existing system that was broken, but aimed to improve the system’s efficiency.

“We need to provide the best system for farmers, their brokers and logistics,” Mr Ditterich said.

Agrichain was established in 2015 and hopes BlockGrain will become the largest industry-wide platform for managing the agricultural supply chain, and its data management is the key to facilitating transactions, providing traceability and creating more efficient logistics.

“From paddock to GrainCorp, paddock to end-user, to port or to your own silo, you don’t have to worry about where that load went,” Mr Ditterich said.

“As soon as the load is delivered, the system updates and you can invoice it.”

Mr Ditterich said BlockGrain aimed to provide efficiencies through, for example having data, which has been entered by the grower, stay with the grain on its journey to the point of consumption.  A beta system, simplified, has been operating over two harvests.

“In BlockGrain we are taking something that already happens in a complicated way and making it very simple for everyone to use.”

Mr Ditterich said smartphones would contribute to the depth of information provided by BlockGrain through enabling images of weighbridge receipts or other documents to be attached to the parcel of grain as it passed through the supply chain.

This meant that growers, brokers, trucking companies, buyers and others entitled to access could view documents immediately and simultaneously, instead of having to wait weeks in some cases for paperwork to arrive.

The system also promises to reduce or eliminate the likelihood of harvest-time human error, such as missing paperwork, from hampering a parcel of grain’s progress through the supply chain.

Public and private layers exist in the blockchain.

The public layer, on the ethereum main network public blockchain, can facilitate commodity smart contracts, freight contracts and AGRI transactions, and can provide proof of origin.

The private layer would communicate with the public layer as required.

The private layer would exist to keep data private and also to avoid waiting times and reduce transaction costs which would be associated with the public layer.

It would record data such as commodity and freight contract, stock management, tracking and agronomics.

BlockGrain issues a token it calls AGRI, with which you can pay for system access through a payment gateway.

Services provided by BlockGrain to user will incur an AGRI transaction fee.

AGRI is an exchange-traded utility token. AGRI tokens collected by BlockGrain as revenue may be sold to the open market to realise profit.

While these are examples of how tokens can be used in BlockGrain, grain transactions in Australia will typically be conducted and settled in Australian dollars.

“We are doing a token sale as we speak.  That is why we are out on the road.

BlockGrain will also support a private “SEED” token not tradeable on public exchanges, a kind of internal currency.

Agrichain has already presented BlockGrain in Perth and Adelaide, and present in Brisbane, Sydney and Melbourne in the coming week.

For details of the distribution read the BlockGrain information White Paper.