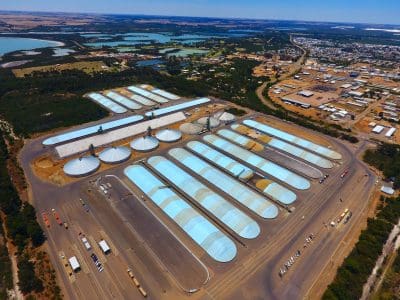 The rebate delivered by CBH Operations follows the $4/t reduction in supply-chain fees announced last year for the 2018-19 harvest.

CBH chairman Wally Newman said that since the Grower Patronage Rebate program began, CBH had returned more than $440M to growers while continuing to deliver a significant capital investment program.

“We’ve made our largest ever investment in our network this year, spending approximately $240M on network capital and maintenance, including approximately 1.08Mt of new storage, as well as throughput enhancements to improve our site turnaround times during harvest,” he said.

“Last year, we made the decision to reduce supply chain fees by $4/t, equivalent to $66M, for the 2018-19 harvest and we have held those fees flat this year, helping our growers to remain competitive in the global market.

“CBH’s storage and handling costs remain the lowest in Australia and we are committed to ensuring that this remains into the future.”

The challenges include the ongoing Chinese anti-dumping investigation into Australian barley, the prolonged drought in eastern Australia, which increased grain values during harvest.

These values retreated when wheat was imported into Australia from Canada, and increasingly strong competition from the Black Sea region into key contestable markets also put downward pressure on prices.

“Grain prices have been in a steady decline since the 2018-19 harvest, where they reached record prices as a result of the drought in eastern Australia,” Mr Wilson said.

“While Western Australian growers have benefitted from the high grain prices, the compounding events have impacted Marketing and Trading’s ability to make a profit this year.

There will be no investment rebate for growers in the current marketing year.

CBH’ said its oat-processing business Blue Lake Milling was reinvesting capital into maintenance and upgrades at its Forrestfield facility, and Interflour did not return a dividend to CBH this year.