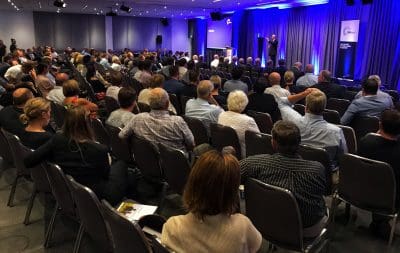 CBH Group is planning to spend more than $150 million to add in excess of 800,000 tonnes of new storage and associated inloading and outloading equipment to the Western Australian bulk-handling system, with work due to start in coming months.

This follows more than 650,000t of new storage constructed at  14 sites last year.

Key storage projects include 236,000t at the McLevie receival site, 122,000t at Dowerin, 152,000t at Cranbrook, 96,000t at Wickepin and 84,000t at Lake Grace, with a number of other projects under evaluation for new permanent storage as part of CBH Group’s annual planning cycle.

The cooperative has also scheduled the implementation of a number of enhancement projects this financial year, which will allow sites to increase their rate of receival.

“Our growers are operating in an increasingly competitive global environment and with this in mind, we’re preparing the network so it’s not just the best in Australia but rivals the best in the world,” CBH chairman Wally Newman said.

Continuing a trend of recent years and supporting CBH’s ongoing investment in current network planning, more than 96 per cent of the total crop is received at CBH Group’s 100 Network Strategy sites.

“CBH has adopted the Plan-Build-Operate model, which ensures the significant ongoing investment into the network is well thought out and delivered on-time and effectively for the benefit of growers,” Mr Macnamara said.

“This model utilises a rolling three-year planning cycle to drive the effective deployment of capital and shape the network of the future.

“Our plan is refreshed every year after extensive analysis and consultation, and this helps us to inform decisions on inloading and outloading grain and storage options at each of the core sites.”

CBH Group is Australia’s biggest bulk handler, and has more than 20 million tonnes of permanent and temporary storage combined in its WA network, which includes four export terminals.