AUSTRALIAN pulse producers and their international and domestic customers got closer last Friday with the opening of a joint-venture pulse milling plant at Westbrook near Toowoomba in Queensland.

The plant can process six tonnes of chickpea per hour which are packaged on site bagged as per customer requirements or delivered in bulk.

“This is considered the most modern plant in Australia. Colour-sorters and the latest dehulling equipment here add value for both top grade and second grade chickpeas from the farmer.  Oil-additive equipment allows us to make our dhal into a retail product.  Chana dhal is major protein food in the Indian subcontinent,” Maralong Milling co-owner Peter Brodie said.

Chana dhal is a staple of Indian populations around the world, and is rising in popularity in Western markets.

Product from the Maralong Milling plant is destined for export to the United Kingdom, Canada, US, Mauritius, as well as to Indian subcontinent markets.  Most of the chana dhal, bought by importers in these countries, is further processed into besan flour, milled at destination for sale, fresh, for human consumption. 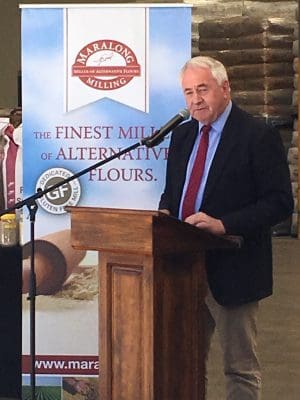 “This location is 12 hours by air from half the world’s population.  It gives this region real potential to feed areas of Asia that need food,” Cr Antonio said.

“The Toowoomba Second Range Crossing, which is now under construction, will cut 20 minutes transit time for people and products between here and the Port of Brisbane,” he said.

Completing ‘the golden trifecta’, the planned Brisbane to Melbourne inland rail must drive efficient flow of products between southern Queensland, the Port of Brisbane and south to Victoria.

Maralong’s drawing arc for desi chickpeas ranges from Emerald in central Queensland to Narrabri in northern NSW.  Central Queensland harvest usually runs from September to October and harvest moves southward through southern Queensland and NSW in October, November and December.  Mr Brodie said while they have some long-term supply already in place, PB Agrifood is buying chickpeas for the joint venture Maralong Milling.

Maralong’s chana dhal plant near Toowoomba is the third production line in the non-gluten factory which also produces soy and other products.