AUSTRALIA’S largest domestically owned brewer, Coopers, has opened a $65 million malting plant today at its Regency Park brewery in Adelaide to mark the biggest single investment in the the family company’s 155-year history. 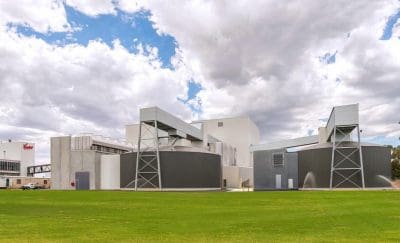 Coopers’ malting plant at Regency Park in Adelaide has the capacity to produce 54,000 tonnes of malt per year.

Coopers managing director, Dr Tim Cooper, said that at full capacity, the plant would produce around 54,000 tonnes of malt a year and give Coopers full control over an important raw material.

Coopers will use approximately 17,000t of the plant’s annual malt output, and the balance will be sold to a range of domestic and export customers, including independent brewers looking for reliable malt supplies.

“South Australian farmers are recognised as producing some of the best malting barley in the world and we will be looking to establish strong relationships with them into the future,” Dr Cooper said.

The plant’s barley will mostly be sourced from South Australian growers, and principal varieties of barley sought would be Commander and Compass.

South Australian firm, Ahrens Group, also a leading manufacturer of grain silos, built the 13,000 square metre plant, and the malting and milling equipment inside it was supplied by the Swiss-based company, Buhler.

Dr Cooper said saline aquifers beneath the brewery would provide the water, which would be desalinated on site, for use in the malting process, which requires 4000 litres for every tonne of malt produced.

The new plant marks a return to the maltings business for Coopers.

Between 1988 and 2002, Coopers was a majority shareholder of Adelaide Maltings until it was sold to AusBulk to help pay down debt incurred by Coopers’ move from its old Leabrook brewery to Regency Park, which opened in 2001 at a cost of $40m.

“When we sold to AusBulk, it was with the intent of eventually getting back into that business,” Dr Cooper said.

The maltings is entirely self-funded and will create an additional eight jobs.

The first beer brewed from malt from the new plant is expected to be in hotels and bottle shops before Christmas.

The plant was officially opened today by the Governor of South Australia, His Excellency the Honourable Hieu Van Le AC.