WHILE Australian livestock and cotton producers remain upbeat about their prospects for the year ahead, grain grower confidence is more subdued due to low cereal prices and concerns over a lack of winter sowing rain in some areas, according to the latest Rabobank rural confidence survey.

Those with a pessimistic view of the year ahead stood at just 10pc.

Much of the positive sentiment in the survey came from the sheep and beef sectors, driven by historically high prices for lamb, mutton, wool and beef.

In broadacre farming, cotton producers expressed high confidence levels, but their grain-growing counterparts were far less buoyant as pricing woes were compounded by the variable start to the winter cropping season, particularly in Western Australia, South Australia and Queensland.

Rabobank national manager country banking Australia Todd Charteris said prices were a particularly strong driver of the bullish sentiment in the sheep and beef sectors, reported by 85pc and 83pc of sheep and beef graziers, respectively.

“There has rarely been a better time to be a grazier with prices for beef, lamb and mutton continuing to hit new records, and wool prices also at an historical high – albeit back down from its recent peak,” he said. 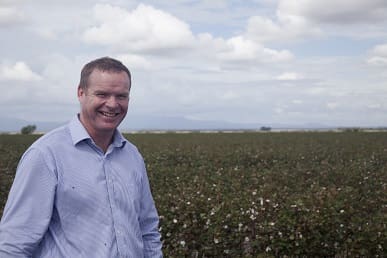 “Strong price prospects – pegged to remain above $520 per bale in 2017/18 –together with good water availability is shoring up confidence in the cotton sector,” he said.

Unsurprisingly, Mr Charteris said, grain growers were the least bullish about prices, with any support for local wheat prices expected to come from an anticipated softening of the Australian dollar, rather than a shift in global fundamentals.

“As such, we are seeing prices play a part in crop rotations, with an increase in the area planted to canola and pulses, particularly chickpeas and lentils, at the expense of barley and oats,” he said.

Mr Charteris said the season was also stymying confidence in the grains sector, with planting rains falling short in many regions including parts of WA and Queensland, the Eyre Peninsula in SA and also northern NSW.

“In contrast, the season has got off to a flying start in Victoria as well as the Riverina region of NSW,” he said.

Overall seasonal conditions were reported as a positive driver of confidence by 36pc of Australian farmers, up slightly from 31pc last quarter.

This quarter, the survey also questioned Australian farmers for the first time about their uptake and use of sensor technology, such as drones, moisture probes, yield mapping, EID (electronic identification) and auto drafting.

Mr Charteris said although the uptake of sensor technologies was found to be relatively low to date (23pc of all farmers surveyed) – its usage was much higher (57pc) in larger farming businesses with gross incomes above $1 million.

“While sensor technologies are increasingly being used and talked about, particularly yield mapping in the cropping sector, there is still a long way to go,” he said.

“For many, the uptake is being hindered by the cost of the technology compared with the benefits for both productivity and profitability.”

While confidence in Australia’s agri sector increased this quarter, farmers were slightly less optimistic about expectations for their own gross farm incomes in the 2017/18 financial year.

Overall, 31pc of surveyed farmers expected their incomes to increase over the coming 12 months, while 48pc were expecting little change in their financial position. And those expecting incomes to be down stood at 19pc.

This was largely influenced by a significant downward revision in incomes among sugar growers, with 57pc expecting lower farm incomes in 2017/18 (compared with 20pc in the previous survey).

Across all commodity sectors, the survey found farmers holding robust investment plans for the coming 12 months.

Overall, 27pc are looking to increase investment in their farm businesses, while 66pc are intending to maintain it at current levels.

Mr Charteris said investment was pegged to be particularly strong in the cotton sector, with 36pc of cotton producers looking to increase investment over the coming 12 months.