EASTERN Australia’s major bulk-handler GrainCorp Limited has announced an underlying net loss after tax of $82 million for the year to 30 September, $153M below its FY18 profit result of $71M. 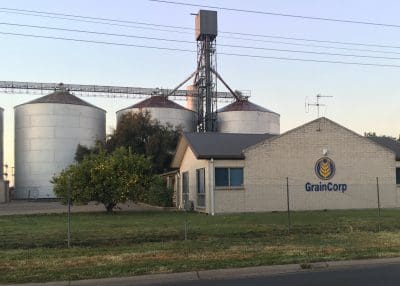 GrainCorp’s site at Horsham in the Victorian Wimmera.

The result has fallen within the guidance range announced on 2 August, which warned earnings were being impacted by one of the worst droughts on record in eastern Australia, compounded by significant disruptions in global grain markets.

Earnings before interest, tax, depreciation and amortisation of $69M for FY20 are 26 per cent of the comparable FY18 figure of $269M.

“Our country supply chain and port networks are reliant on grain volumes and, with minimal production in eastern Australia, our receivals and exports were down significantly on last year,” GrainCorp chief executive officer Mark Palmquist said.

“There were large grain deficits across much of Queensland and New South Wales and, in response, we reversed our port supply chains and trans-shipped over 2 million tonnes of grain from other states to satisfy eastern Australian demand.

“Trans-shipments of this size are rare, and this emphasises the severity of the drought and demonstrates our ability to adapt to manage these extreme factors.

“Our grains business was also negatively impacted by unexpected disruptions to international grain trade flows and Australian grain markets, which caused a rapid and material decline in feedgrain values and, in turn, adversely affected our positions.”

To help satisfy demand for grain in these regions, GrainCorp expects further grain trans-shipments from Western Australia, South Australia and Victoria throughout FY20.

In the second half of FY19, GrainCorp Malt recorded increased sales generated by continued solid demand from its craft-beer and distilling customers.

On the infrastructure side, GrainCorp Malt’s operations in Scotland are expanding towards an annual capacity of more than 300,000 tonnes.

Works include an upgrade of Bairds Malt’s Arbroath facility, and construction of a new malting plant at Inverness.

GrainCorp Malt expects continued high utilisation of its malting plants and a continuation in solid demand for malt and brewing ingredients from both brewing and distilling customers in FY20.

In GrainCorp’s Oils business, oilseed crush margins have continued to be adversely affected by the ongoing drought, which has reduced canola supply and increased the cost of seed.

The Bulk Liquid Terminals and Feeds businesses both performed well, with terminals maintaining a high utilisation, and feeds benefiting from strong demand.

In June this year, GrainCorp announced it had entered into a 10-year Crop Production Contract with White Rock Insurance (SAC) Ltd to help manage the risk associated with the volatility of eastern Australian winter-grain production.

The contract is effective for FY20, and will be used to help smooth cashflow through the cycle and provide protection in severe drought years.

It will also enhance the Group’s ability to invest and plan for the long-term.

During the year, GrainCorp undertook a comprehensive review of the Company’s portfolio of assets to assess a range of strategies to create improved value for shareholders.

In March, GrainCorp announced the sale of its Australian Bulk Liquid Terminal assets for a total enterprise value of $350 million. The sale is currently being reviewed by the Australian Competition and Consumer Commission, with a decision due tomorrow.

In April, GrainCorp announced it would integrate its Grains and Oils businesses into a single business unit.

The integration is well advanced, and the company said it would benefit customers through improved access to infrastructure and logistics.

The company also announced in April that it was pursuing a demerger of the Malt business, which is expected to “unlock significant value for shareholders” and create two ASX-listed agribusiness companies.

The demerger will be implemented by a scheme of arrangement, with the Scheme Booklet expected to be sent to shareholders in the first quarter of calendar year 2020.