Farming robots – coming soon to a paddock near you

THE space-age, automated farming machines developed by the SwarmFarm Robotics project in Central Queensland are set to move into the commercialisation phase mid-way through next year with plans to build a batch of 50 units for release to the farming sector. 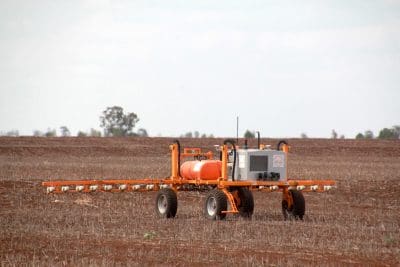 SwarmFarm Robotics plans to build 50 of its driverless, robotic farming machines mid-way through next year for commercial release.

The lightweight, driverless, robotic platforms can be programmed to autonomously carry out a range of farming tasks.

Testing has been carried out over the past five years with five prototype units, each weighing only 1.5 tonnes and driven by diesel engines powering hydraulic drives.

While the current models have been fitted with eight-metre booms and WEEDit spot spraying systems for weed control work, there is potential for the technology to be adapted to a range of tasks including tillage and precision planting.

SwarmFarm founder and managing director, Andrew Bate, and his wife, Jocie, who have been running the project on their Emerald farm in conjunction with university researchers and funding from a host of sponsors, say they are ready to move to the next stage of releasing the technology into the “real world”.

“One of our challenges is the build cost. As they are now, with the WEEDit boom which is $40,000, they cost $160,000. They are hand-made and take about two months to build. Until we develop a production run of doing four or five at a time, that is what the cost is,” Mr Bate said.

“We will look to do pre-orders in the first and second quarters of next year for early-stage customers. For us it is finding people who are prepared to take the technology on and have some patience because we all know this sort of technology is never perfect in the first round.”

Addressing visitors to the farm on an AgForce tour, Mr Bate said the aim of developing the robotic platforms was not to try to automate agriculture, but to open up opportunities for creating new farming systems.

“One of the drivers for me was how do we farm better? We had been doing controlled traffic and zero till for a long time, so it was a matter of what’s next,” he said.

Mr Bate said the underlying concept of the machines was that they weren’t specifically a sprayer or a planter, but a universal platform for carrying different modes of farming equipment.

“It is a tool carrier for carrying new technology. It can have a sprayer on it, a fertiliser spreader, a planting unit,” he said.

“This will be open technology that anyone can build on top of. The innovation that will flow from these platforms will be fantastic for agriculture.”

“People often say to me that robots are going to be complicated with lots of moving parts and electrical systems. But the amount of circuitry and computers we have on headers, sprayers and tractors nowadays is full on. So we are trying to break technology down to small pieces that people can manage and fix themselves,” Mr Bate said. 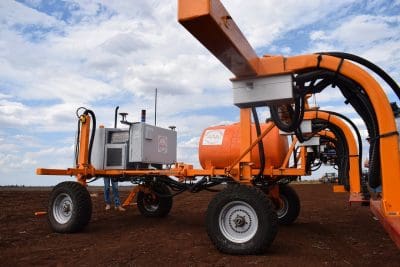 “In designing the robot machines, from the start we trademarked a word “swapnostics” which means every part of the machine is quickly swappable. If you bend a wheel assembly, it is simply U-bolted on so you can quickly swap it over. The whole engine is held on by four bolts, so if you blow an oil pump and cook the engine you don’t have to call a mechanic out and spend days trying to diagnose it. You just undo four bolts, send it away to get fixed and drop another one on.

“There are quick connectors on the wiring loom so you can just unclick the connectors and pop it out if you have an electrical problem. Eventually we will have it to the stage where, within 40 minutes, you can changeover an entire wiring loom.”

Slow and steady wins the race

Mr Bate said what set the robotic machines apart from conventional machinery was they operated at very slow speeds or would even stop if required.

The machines are currently set for spot-spraying at about 8 kilometres/hour, or 6.4 hectares/hr, compared to conventional sprayers which operate at 16 to 20km/hr.

“It is a bit like watching paint dry once they are working in the paddock. But it means we can get a better application of the chemical on the plant because at that slower speed the droplets go straight down, they don’t shoot backwards,” he said.

“The next thing will be individual weed detection. The technology for that isn’t available now because everyone has tried to make it work at 16 to 20km/hr and it doesn’t work so well. But if you go at 2km/hr and the technology can work. It is all to do with vision processing. Because our machines can run at 0.5, 1.0 or 2km/hr, that technology starts to come into play.

Mr Bate said there had been a lot of work done around the world on individual weed detection that was finally producing results.

“We have been waiting for someone to come up with something suitable and we think we have found that company now. We will trial the system in January,” he said.

“It is all about being able to slow down and get more accurate on the ground. That is where this technology enables it.”

The robotic machines are fitted with 3D obstacle sensors on the front to detect any obstructions. 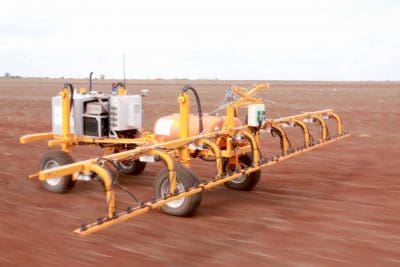 The machines are currently set for spot-spraying at about 8 kilometres/hour, or 6.4 hectares/hr.

There is also a backup system of bumpers along the front that stop the machine if they come into contact with anything.

But essentially the system relies on the paddocks being pre-mapped for obstacles and that information then being programmed into the machine.

“If you mark the obstacles out, the robot plans around them. But if it sees something it is not expecting it stops. Then you go and find out what it is and sort it out,” Mr Bates.

“If you walk in front of the machine it will slow down and as you walk away it creeps up on you. That’s all a bit creepy.”

Mr Bate said there hadn’t been any legal issues in relation to operating the autonomous machines.

“We have insurance, so there are companies that are interested in this space,” he said.

“There is so much autonomy going on now with driverless cars and driverless mining machines, so there are precedents of other industries doing it. Centre pivots have been running unmanned for years and so have lateral moves.”

Researchers are working on potential new developments for the machines that include refining their capacity for automatic docking to facilitate reloading inputs and incorporating weather parameters into the operating programs for spraying operations.

“We have had the early prototype autonomously docking and never missed one. It is easy to do. But we haven’t put the resources into developing a new dock for the latest model. We have started the project now,” Mr Bate said.

“We have built the tank and the little trailer to tow around with the arm to go over the top, so docking will come into play in the first quarter next year. With the WEEDit we haven’t needed it. At the moment, we are using 150 litres a day out of a 600-litre tank, so it hasn’t been a priority. Once we get to blanket spraying it will become more relevant. 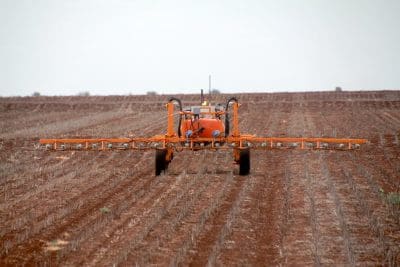 The robotic machines are fitted with sensors and bumpers to avoid obstacles.

“And incorporating weather parameters (into spraying operations) is in the pipeline. Some products now have specifications on the label, so we can build that into the application.

“There could also be ‘path planning’ where the machine will go and spray the easy parts of the paddock first and come back and do the sensitive areas when the conditions are right. It might mean it stays away from an area until the wind conditions are perfect.”