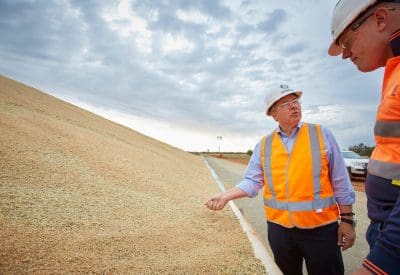 Mark Palmquist will switch his managing director and CEO role from GrainCorp to United Malt Group with the planned demerger. Photo: GrainCorp

THE SPLITTING of GrainCorp into two ASX-listed companies appears to be fast approaching, with GrainCorp yesterday outlining details of its proposed demerger in a presentation to investors.

It will divide the company’s assets and operations into two camps, GrainCorp, which will retain the company’s grain accumulation, handling and trading functions and assets, and United Malt Group (UMG), which will stand alone as the world’s fourth-largest commercial maltster.

Subject to legal approval, UMG shares are expected to commence trading on the ASX on 2 April.

GrainCorp has said the demerger will enable and accelerate a number of simplification and cost-reduction initiatives to continue, and deliver cost savings of about $20 million per annum once the company splits.

“After the demerger, there will remain the potential for GrainCorp, United Malt or other GrainCorp portfolio businesses to be sold to a third party, potentially delivery a control premium to GrainCorp shareholders and/or UMG shareholders,” the company said in its presentation.

UMG’s key brands and operations will be centred on the 13 facilities in total it owns through Bairds Malt United Kingdom, Barrett Burston, Canada Malting Co. Limited, and Great Western Malt.

Its malting plants have a total annual global capacity of around 1.25 million tonnes (Mt) , with around 20 per cent of it held through its three Barrett Burston malthouses in Australia, a further 20pc with Bairds in the UK, and the balance in North America.

On the home front

GrainCorp is eastern Australia’s biggest bulk handler, where its assets include 145 country receival sites which can store up to 20Mt in total, and seven bulk import/export port facilities with a combined bulk export capacity of 15Mt per annum.

Drought-reduced receival volumes and now-expired take-or-pay rail contracts were among the factors which have just about halved GrainCorp earnings in the past two financial years from the $127 million recorded in 2016-17.

The Crop Production Contract (CPC) is expected to address this exposure to low-volume years in eastern Australia by underwriting the business’ cash flows and profitability.

Production payments are capped at an aggregate net limit on received or issued payments of $270M over the CPC’s 10-year term, with the premium expected to be less than $10M annually.

Yesterday’s presentation outlined plans to augment GrainCorp’s origination clout in the Black Sea on coarse grains for the human and stockfeed markets, in Canada, and in the organic markets in the UK and North America.

Priority destination markets have been identified as:

Its GrainsConnect Canada joint-venture with Zen-noh gives GrainCorp a presence in Canada, and it owns five bulk liquid storage terminals in New Zealand and one in Shanghai.

In Australia, GrainCorp owns oilseed-crushing plants in Numurkah and Pinjarra and refining facilities in Footscray and Numurkah.

GrainCorp’s senior management team under chairman Peter Richard and managing director and CEO Robert Spurway, all continuing in their current GrainCorp roles, will be: