EASTERN seaboard grain handler, GrainCorp, has called on the Queensland Government to co-contribute $11 million towards a $52 million project to build two new grain handling facilities and upgrade the rail network in southern and central Queensland. 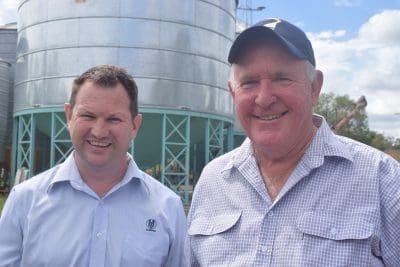 “We want the government to co-fund $11 million to go towards upgrading their infrastructure that links our sites to the ports. Without that investment we are not able to get the grain to port efficiently,” he said.

“At the moment, there are 500,000 tonnes of grain moving by road that should be on rail. It is putting Queensland growers at a massive disadvantage.

“We are trying to take trucks off the roads to reduce wear and tear on the roads and provide safer roads for the community.”

As part of the overall project, Mr Foster said GrainCorp was well advanced with the establishment of two, state-of-the-art grain handling facilities in Central Queensland and the Darling Downs.

“We have a new facility going through developmental approval at Yamala 20 kilometres east of Emerald in Central Queensland. We are ‘shovel ready’. Everything is ready to go. We are just waiting for the approvals so we can make the investment,” he said.

“The other site is just north of Dalby on the Darling Downs. There are development applications in with the local council and we are waiting on approval. The new sites will help growers intake the grain efficiently, get it onto rail and turnaround to port.”

At the 180,000t Yamala site, GrainCorp is investing $21.5 million in a high speed rail loader and upgrades to the site and rail siding, while calling on the Queensland Government to stump up $8.5 million to reopen a rail line and bridge and construct a new spur line connection with the main line.

At the 150,000t Dalby site, GrainCorp will spend $19.1 million in upgrades to the rail loader if the Queensland Government puts in $2.5 million for the reopening of a 6.5-kilometre stretch of rail line.

AgForce Grains president, Wayne Newton, said AgForce supported the call by GrainCorp for the Queensland Government to help fund the reinstatement and replacement of railway line infrastructure so GrainCorp could go ahead with major capital expenditure and develop new grain handling facilities up-country. 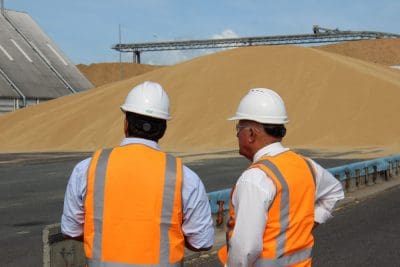 New investment is set to ease the movement of grain by rail in Queensland from farm to ports, such as Brisbane.

“This will be a game-changer for the Queensland grains industry because it will improve the efficiency of grain exports from the State,” he said.

“Queensland has the highest price for freight from farm to port in the whole of Australia. We are trying desperately to improve this situation. Many growers are paying 30 per cent or more of their gross income to get their grain from the farm to port.

“About 90 per cent of our grain exports used to get to port on a train, but now it’s only about 50pc despite the fact rail is more efficient with 20 trains enough to load a vessel compared to nearly 1000 trucks.”

Mr Newton said this season’s massive winter crop created major logistical problems which highlighted the need to improve the efficiency of the rail network and get more grain onto rail.

“This will save a lot of heavy vehicle movement on the highways, improve the efficiency of grain movement and make it much more efficient to load ships,” he said.

“We see it as a significant opportunity to return more to growers’ pockets if we can improve the efficiency of the handling system from farm to port.”