NATIONAL grain farmers’ representative body, GrainGrowers, has appointed joint CEOs to lead the operations of the independent and technically resourced organisation into the future. 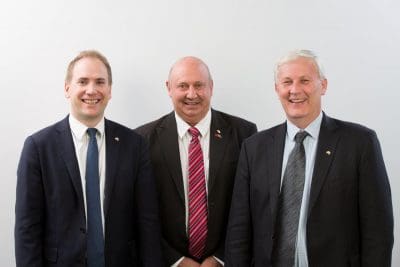 Michael Southan and David McKeon, formerly general managers of industry development and policy and innovation respectively, have been promoted to the roles.

“They have both been closely involved in determining and executing the company’s strategy to date and are well qualified to lead,” Mr Eastburn said.

Mr Southan has more than 20 years of experience as a researcher in grain quality and grain-food processing, having previously worked with CSIRO and BRI Australia.

He has a PhD in Agriculture and has made a unique contribution to milling research by combining cereal chemistry disciplines with milling engineering.

Mr Southan has held past positions as deputy chair of the Grains Research and Development Corporation’s (GRDC) southern panel and as a member of the GRDC northern panel, and is a graduate of the Australian Institute of Company Directors.

His passion for agriculture and food keeps him actively involved in his farming business with his family.

Prior to joining GrainGrowers, he held the position of manager, rural affairs at the National Farmers’ Federation and previously played a key role within the Federal Department of Agriculture on a variety of national policy issues.

Complementing his policy expertise, he has significant hands-on experience working on a number of mixed farming operations.

Mr McKeon holds a Bachelor of Applied Science (Agriculture) and Bachelor of Agribusiness from Charles Sturt University, together with a Diploma of Government and he is a graduate of the Australian Institute of Company Directors.

He continues to drive outcomes for farmers through a number of industry leadership positions, including on National Farmers’ Federation policy committees, Grain Trade Australia technical committees and the ACCC Agricultural Consultative Committee.

He has recently been appointed to the Graham Centre Industry Advisory Panel.

“Having joint CEOs will allow GrainGrowers to accomplish more by delegating different roles to each head,” Mr Eastburn said.

“It will provide increased scope and broader capacity for the organisation to achieve its goal of bringing about a more efficient, sustainable and profitable grain production sector that benefits all Australian grain farmers and the wider grains industry.

“Both CEOs share high trust and communication with each other and I have every confidence their combination of skills and expertise will lead the business into the next phase of its growth strategy for the benefit of grain growers and the industry.”