FERTILISER supplier, Incitec Pivot Fertilisers (IPF), is investing in new distribution facilities at Port Adelaide in South Australia in an ambitious program to improve its service to rural customers this season. 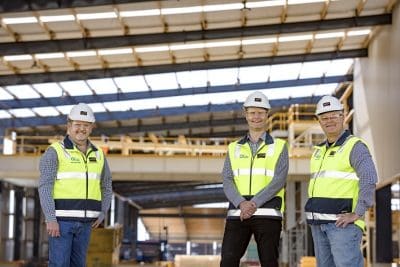 Incitec Pivot’s Damian Hollitt, Gerard Buckle and Paul Hampel at the new complex at Port Adelaide which is big enough to store 50,000 tonnes of fertilisers, a Ranco five hopper blender and loading facilities.

The company is also trebling blending capacity at its Port Lincoln site and upgrading its Wallaroo site, all in time for the 2018 season.

Valued at more than $25 million, the new Primary Distribution Centre at Port Adelaide will be equipped with state of the art facilities for bulk and blended fertilisers as well as applying liquid coatings like fungicides and trace elements when it is commissioned in February.

Two kilometres from the company’s existing site, the new 17,000 square metre complex has facilities for storing 50,000 tonnes of fertilisers, a Ranco five hopper blender and a dual liquid application system, all under one roof.

It will also be equipped with three load-out points and three weighbridges, as well as two parking lanes for trucks waiting to be loaded.

“We appreciate that customers picking up their fertiliser orders want quality products, loaded safely in the fastest possible time, so they can be back on the road delivering those fertilisers,” he said.

“This new facility will set new standards of efficiency and streamlined service to our customers, particularly at the peak of the season.”

The opening of the new site at Ocean Steamers Road will mark the beginning of a new era as it replaces the Port Adelaide site where fertilisers have been made, stored and despatched for more than a century.

Mr Buckle said the new site would be more environmentally friendly, with front end loaders operating only inside the warehouse and an automated conveyor system above each weighbridge reducing the risk of spills.

Commercial & General Group (C&G) built the new facility for Incitec Pivot Fertilisers in eight months, in time for the equipment fit-out which began in November 2017.

Meanwhile, IPF is installing a new Ranco blending plant as part of a major upgrade to its Port Lincoln site.

The five-hopper blending plant is set to improve load-out times for blends from 70 tonnes/hour to 200t/hr in a much-needed move to enhance the capacity of the site and reduce turnaround times for Eyre Peninsula customers.

The upgrade will also equip the site with a new generation applicator for applying trace elements, fungicides and other liquid coatings to a range of fertilisers.

IPF commissioned the first of these liquid applicators at its Oyster Cove facility in Geelong last year, mainly to apply flutriafol fungicide to planting fertilisers such as DAP, MAP and Granulock SS.

“Our staff have developed a paddle applicator which sprays and mixes the liquid simultaneously to ensure that every fertiliser granule is coated, giving far better coverage than older systems that spray fungicide over the fertiliser on a belt conveyor,” Mr Buckle said.

“We are installing similar units at Port Adelaide and Port Lincoln to support the growing demand for fertilisers coated with trace elements, fungicides and enhancing agents.”