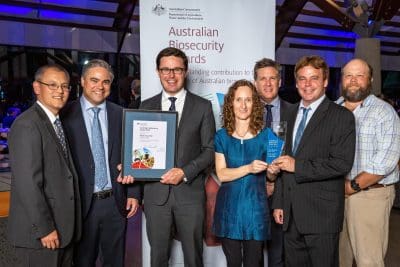 Minister for Agriculture David Littleproud with representatives from the Manildra Group and the Department of Agriculture, Water and the Environment at the Outlook 2020 dinner. Photo: Steve Keough Photography

MANILDRA Group has this week received an Australian Biosecurity Award for its handling of Canadian wheat from its point of discharge at Port Kembla to end use at its Shoalhaven Starches plant at nearby Bomaderry.

A Department of Agriculture and Water Resources officer nominated Manildra for the industry award, which was presented at the ABARES Outlook conference dinner in Canberra.

The award recognises individuals, groups or organisations in industry that have demonstrated a significant contribution to maintaining Australia’s biosecurity integrity.

The New South Wales drought continued throughout last year, and industry sources have said Manildra is likely to continue to use one panamax of Canadian wheat per month throughout most of this year to supplement drought-reduced domestic supplies.

Following is information provided by the Department of Agriculture, Water and the Environment about Manildra’s award, one of eight biosecurity awards presented at the Outlook 2020 dinner.

Imported bulk grain relies on the application of strict measures and collaboration between industry and government to manage any potential biosecurity risks. Manildra Group’s approach ensured the biosecurity risks were managed along the entire import supply chain, through the establishment of a discrete program of work.

In addition to adhering to strict import conditions, such as sourcing grain from a low-risk country, the organisation also used a range of innovative solutions including implementation of a secure, closed-loop system.

This also included investing in a watertight container system to prevent any leakage while the grain was transported from the port to the storage facility.

A comprehensive training program was developed for various roles within the organisation.

The program articulated the potential risks and the requirements for managing them at various points in the supply chain.

A biosecurity specialist consultant was engaged to provide strategic advice and inform the organisation’s import approach.

Their approach demonstrated a commitment to managing biosecurity risks across the entire import continuum, through innovative and strategic solutions.

Today, the organisation continues to investigate new and improved ways to support the import process.