THE continued appreciation of the Australian Dollar (AUD) has offset better seasonal conditions to see the NAB Rural Commodities Index fall slightly by 3.7 per cent in August.

The latest NAB Rural Commodities Wrap released today details the impact the high AUD could have on rural commodity prices and provides insight into the bank’s view on the AUD’s trajectory.

NAB Agribusiness economist, Phin Ziebell, said while much of the appreciation of the AUD was down to persistent weakness in the US Dollar (USD), China’s demand for Australian resources for its industrial and infrastructure led recovery would put further upward pressure on the AUD.

“NAB forecasts point to an AUD around the 80 US cents mark by mid-2022. This will be a headwind for Australian agricultural commodity prices, particularly local grain prices,” Mr Ziebell said. 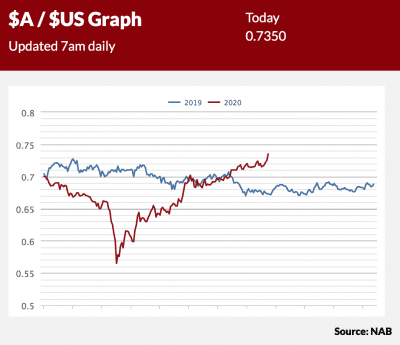 Driven by summer rain and consistent wetter than average seasonal outlooks, NAB’s elevated expectation for the 2020-21 crop outlook has been challenged by drier conditions in late autumn and into winter.

“Subsoil moisture levels are average to above average in New South Wales and southern Queensland, but average to below average across the Western Australia (WA) wheatbelt, South Australia and Victoria,” Mr Ziebell said.

“While the autumn-winter dryness does not appear to have imposed major damage to crops or pasture, it leaves less in the tank in the event of a dry spring, a risk factor for the WA wheatbelt and parts of South Australia.

“Our latest wheat crop forecast is for 24.7 million tonnes nationally this season, an average result that would be an improvement on last season’s yields if it transpires.

“However, with the Bureau of Meteorology (BoM) projecting a much wetter than average spring in the eastern states, indicating a roughly 70pc chance of La Nina forming in the coming months, scope for upside to the crop remains.”

“There is a renewed sense of cautious optimism amongst WA growers following the August rainfall, and on the basis that good spring finishing rains deliver,” Mr Pontifex said.

“There may be some upside pressure in grain prices if Chinese flooding leads to higher Chinese demand, but it isn’t clear if these will flow through to wheat,” Mr Ziebell said. In terms of prices, should the winter crop perform, much of the current domestic basis will dissipate and NAB predicts domestic wheat in the $300/t range at the end of 2020.

“More challenging will be regaining market access into traditional export markets in South-East Asia following a period of lower exports due to domestic feed demand and poor domestic grain supply.”

The Eastern Young Cattle Indicator (EYCI) has hit another record, closing on 800c/kg, reflecting substantial restocker demand and expectations of a big Spring in Queensland, although global demand fundamentals are moving in the opposite direction, which is a concern.