Not a bad time to be a farmer

The release by ABARES of Australian Commodity Statistics in December each year provides an opportunity to look at some of the longer-term trends occurring in the Australian agriculture sector, and there is no doubt that the most recent batch of statistics released paints a very positive picture for most sub-sectors.

Firstly, both gross and net farm income reached record highs in nominal terms in 2015-16, with net farm income (gross farm income minus farm costs) in particular having grown very quickly from approximately $6 billion in 2009-10 to almost $18 billion in 2015-16, more than tripling in just six years. Part of the reason was obviously the generally better seasonal conditions over this period (with the exception of Queensland) and the relatively high commodity prices over the past two years, noting that both grain and dairy prices were relatively weak over this period. 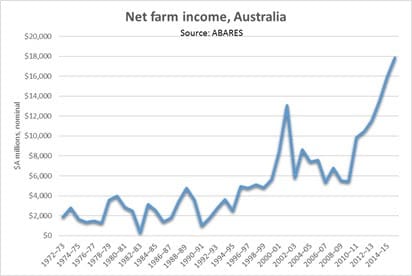 However, another important factor over recent years has been the relatively static or declining prices farmers have paid for farm inputs. This has resulted in an increase in the farmers’ terms of trade (the ratio of farm prices received and farm prices paid), to the extent that those economists who have long believed that this indicator will always trend downwards may have to reconsider that article of faith. At the very least, the rate of decline of this indicator over recent years has slowed dramatically in comparison with its precipitous rate of decline over the period from 1970 to 2000. 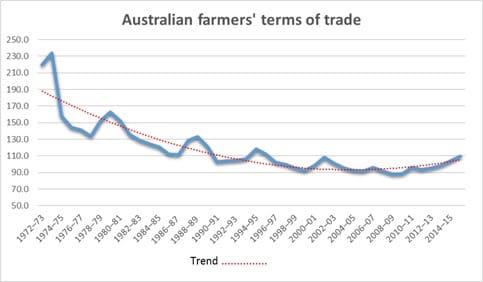 Further confirmation of the generally positive picture arising from available statistics are farm debt levels, and the amount of money farmers have deposited into Farm Management Deposits. Since the introduction of these deposits in the late 1990s, the amount deposited by farmers has generally grown in line with trends in net farm income. The slowing in the rate of growth of FMDs during the milennium drought is very evident in the following graph. 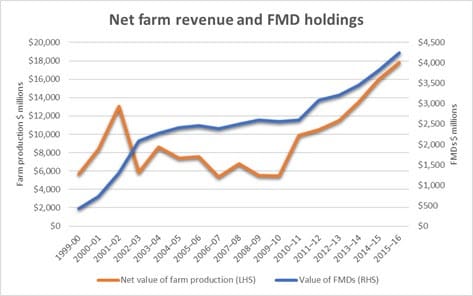 The rate of growth of farm debt has slowed dramatically over recent years, and farmers’ ability to service that debt has improved to a very significant extent.

This is reflected in the observation that the ratio of total farm debt to gross value of production has declined from as high as 160 per cent in 2008-09 to approximately 120pc at the end of 2015-16, and will likely have declined further over the past six months. It is also evident from the earlier observation about Farm Management Deposits. 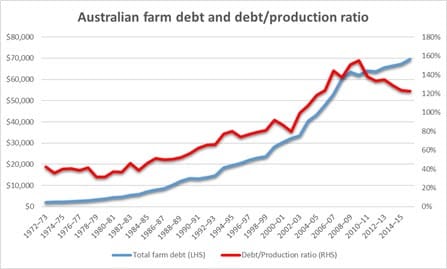 While these figures are aggregated across the entire sector and there are commodity producers and regions that are not enjoying such positive business conditions at present, there is no doubt that it is a pretty good time to be a farmer in Australia, and the sector is certainly better prepared to weather future adverse conditions than it has been for a long time.