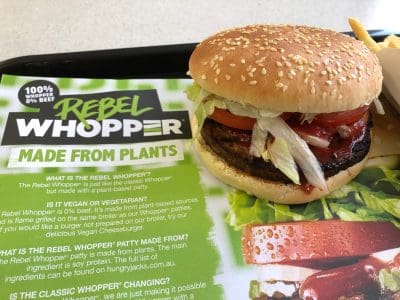 V2FOOD’S plant-based meat has launched in Australia this week as the centrepiece of Hungry Jack’s new Rebel Whopper burgers, and if its rapid take-off is anything to go by, it could soon be landing in Australia’s Asian beef markets.

The product has come out of a partnership between CSIRO, Main Sequence Ventures and Jack Cowin’s Competitive Foods Australia, which operates the Australia’s Hungry Jack’s franchises.

V2food founder and CEO Nick Hazell said the product would quickly expand from its domestic base into an export product too, and retail outlets, restaurants and quick-service restaurants would be targeted in both markets.

“Where beef is being bought is where we want to be,” Mr Hazell said.

According to Mr Hazell, research in the United States showed 80 per cent of plant-based burger sales came from meat eaters, and while v2food was sure to service the vegan market, Mr Hazell said its future lay in demand from omnivores.

“We’ve chosen to focus on the 99pc who are meat lovers rather than the 1pc who are vegans.”

Mr Hazell, a former Masterfoods and PepsiCo research director, said Australia’s “clean and green” reputation made it a well-respected exporter of food and meat to the world, and the meat category would soon include plant-based meat.

“For us to be clearly Australian is a good idea. “We do want to establish ourselves as an Australian brand.”

Mr Hazell said he expected v2food to gain export traction in North Asia, including China, which would in turn add significant value to agriculture produce grown in Australia.

“We see ourselves as producing meat for export within the agricultural system in Australia.”

Mr Hazell said v2food could also take some market share from other types of meat including pork, the production of which had been impacted in parts of Asia by African Swine Fever.

“We haven’t chosen one yet; we’re getting down to the last few.”

“We’re looking for sites to house the factory, and the build will be starting in a couple of months.”

Mr Hazell said sheds rather than greenfield sites were being considered in Victoria, New South Wales and Queensland.

The v2food product has been developed this year at the CSIRO precinct at Werribee near Melbourne.

“We’ve basically built a mini factory in Werribee at a rather accelerated rate.

“It’s enough to get into the market.”

The Rebel Whopper is selling at Hungry Jack’s for the same price as a beef Whopper, and Mr Hazell said it was part of v2food’s plan to price its products on par with and not above its beef equivalents.

v2food “mince” is made from legumes, and contains added fibre and nutrients.

The v2food company intends it to have “a leading presence” in-store and in cafes by early next year.

Mr Hazell said CSIRO was looking at the type or types of legume which would be best suited to producing v2food in large-scale commercial production, and he would not be drawn on the tonnage needed to supply the new plant.

“We will require a decent supply.

“If we’re going to make an impact on a global problem, we need another meat industry’s worth of meat globally.

“We have to move quickly.”

The Hungry Jack’s Nutrition Guide as published on its website lists the ingredients in the Rebel patty as: water; soy protein; vegetable oil; thickeners 461 and 1442; flavours including glutamic Acid 620; dextrose; caramel colour 150c; antioxidants 300 and 307, and smoke flavour.

The v2food launch has come hot on the heels of EAT Group’s announcement of its planned $20m plant at Horsham in Victoria.

It will manufacture plant-based isolates from faba beans and lentils, and Mr Hazell said it might supply product to v2food.

“EAT is the first manufacturer in this space and it’s a great initiative.

“We’re making plant-based meat, and while there are aspects of the businesses that are similar, it’s a different business to ours.”

Minister for Industry, Science and Technology Karen Andrews said v2food presented an opportunity for Australian grain farmers to be at the forefront of the growing plant-based protein market, which would help to grow and create jobs.

“This isn’t about taking a share of the existing meat market, this is an additional opportunity to create a new market that could add $6 billion to our economy by 2030,” she said.

v2food was formed by CSIRO’s Innovation Fund, managed by Main Sequence Ventures, a part of the Australian Government’s National Innovation and Science Agenda (NISA), in 2018.

v2food is marketing itself as a flavoursome and sustainable plant-based product which looks, cooks and tastes like meat.

CSIRO provided research and development resources to v2food on a research-for-equity arrangement.

CSIRO projects this new industry to be worth more than $6 billion by 2030 in Australia.

v2food will begin to appear in restaurants and cafes throughout the remainder of the year and aims to have a leading presence in-store and in cafes around Australia by early 2020.