SOUTHERN Queensland grain industry business, Woods Grain, will receive a $579,000 investment package from the Queensland Government to develop an algae farm that will produce a new feedstock for livestock. 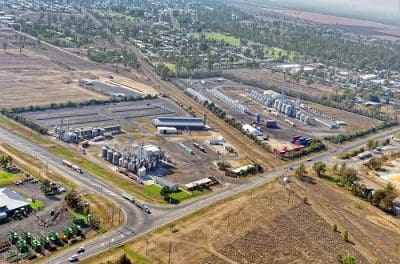 The Woods Grain complex at Goondiwindi.

The company, which grows, processes, markets and transports cereal and pulse crops for a variety Australian and international markets, will build the facility at Goondiwindi where it is based.

Queensland Premier, Annastacia Palaszczuk, said Woods Grain was one of six grant recipients who would help put Queensland at the forefront of the global bioindustrial revolution.

“Under the project, Woods Grain will seek to establish a new algae farm in Goondiwindi and trial new technology for the extraction of omega-3 oil from the algae,” Ms Palaszczuk said.

“This could produce a high-protein feedstock and open up the possibility of a brand new agricultural industry in the state.

“The Woods family has been at the heart of Australia’s grain industry for more than 60 years and continues to contribute to the strengthening of Queensland’s agricultural economy.

Ms Palaszczuk said in recent years Woods Grain, which is part of the Woods Group, had been looking at new protein options.

“This has resulted in collaboration with Professor Peer Schenk, at the University of Queensland (UQ), who has been researching the opportunity to use microalgae grown in small ponds as an omega-3 oil source for human consumption, biofuels and a protein source for stockfeed,” she said.

“Woods Grain has worked with UQ, and in particular Prof Peer Schenk in recent years to support the natural progression of the research to a scale that could see it become a commercial reality.”

Queensland Minister for Innovation, Science and the Digital Economy, Leeanne Enoch, said the project was funded out of the Advance Queensland $5 million Biofutures Commercialisation Program.

Ms Enoch said the BCP, part of the Advance Queensland Biofutures Roadmap, set out to increase the capability and scale of the biofutures industry in Queensland.

“We want to see the biofutures industry grow in Queensland,” she said.

“That’s why we’re prepared to invest in people and companies with new ideas to get new technologies up and running.”