AUSTRALIA’S largest animal-feed manufacturer and one of its biggest users of grain, Ridley Corporation Limited, has recorded an operating profit for the year to June of $43.3m, down $2.5m on the FY17 result, to reflect a $7.3m loss incurred with the demise of Red Lea. 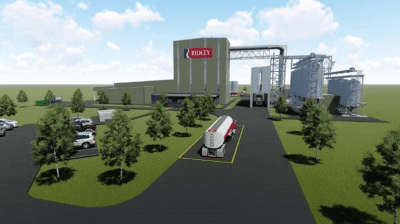 Ridley’s aquafeed mill at Westbury in Tasmania is expected to start operating next year.

The poultry processor was a major supplier of raw materials to Ridley’s rendering mill at Maroota, in northwest Sydney, and its closure earlier in the year was initially estimated to cost Ridley $6-$7m.

“Dairy, poultry, beef and sheep, supplements and Laverton rendering all enjoyed growth in a year impacted by the loss of Maroota’s largest supplier of poultry raw material, and by inventory legacy issues arising from the termination of supply to Huon in the prior year,” the company said in a presentation to investments.

Ridley’s FY18 result includes $6.1m in proceeds from the sale of land at Lara near Geelong, and expenditure on a poultry and pig-feed facility at Bendigo which, with an annual capacity of 350,000t, will be the company’s biggest mill.

The company reports a positive outlook for its poultry division, despite the loss of volume required by Ingham’s from October onward.

Ridley said the pig industry was bracing itself for a tough period as it adjusted to a sustainable supply-and-demand balance which was expected to provide consolidation and longer-term growth opportunities for more efficient producers.

In the ruminant sector, the outlook for dairy has remained positive, with milk-price confidence and stability being progressively restored in the face of high raw-material prices.

“With no end to the regional drought conditions predicted for the foreseeable future, beef and sheep volumes are expected to remain at historically high levels in FY19.”

Aquafeed production is being transferred out of Ridley’s existing Australian extrusion plant at Narangba in Brisbane, and the company has a 49-per-cent stake in a new aquafeed extrusion facility at Chanthaburi in Thailand.

Its new extrusion plant being built at Westbury in northern Tasmania to supply aquafeed is expected to be commissioned by the end of FY19 to.