SILOS, grain, and plant and equipment formerly owned by A&B Grains at Oakey are being sold by its liquidator to clarify the company’s financial position, which includes a debt of $3 million in total owing to unsecured creditors. 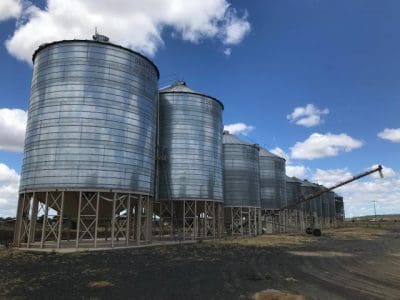 A&B Grains silos at Oakey are among the company’s assets being sold by the liquidator.

Gavin Morton, of liquidator Morton’s Solvency Accountants, said some assets had already been sold, including about 300 tonnes in total of mostly barley and wheat which were in A&B Grains’ on-site silos.

“Some wheat, sorghum and barley which has not been sold is sitting in GrainCorp sites in Dalby, Millmerran, Brookstead, Goondiwindi, Thallon and Warra, and we are now in the process of selling that,” Mr Morton said.

Contracts on commodities including cottonseed, barley, sorghum and wheat are now being finalised.

“Those contracts need to be closed out at fair market value.”

Also to be sold from A&B Grains’ assets is a small tonnage of grain in northern NSW.

Mr Morton said assets of the company had been used to clear its debt with the National Australia Bank.

“We’re still dealing with some other aspects of the business, like accounts receivable, silos, motor vehicles, stock at GrainCorp, recovery actions, and litigations.

Tender process on the silos will commence shortly.

This includes two 300-tonne, two 200t and two 100t silos, as well as three 75t silos, all manufactured by Denny’s, and a mobile grain-cleaning unit.

A&B’s motor vehicles including trailers and prime movers for rebuild are also to be auctioned, and online bidding closes on Friday, 9 March.