Australia’s $2.9 billion fresh bread market is dominated by the two supermarket giants Woolworths Group and Coles Group who represent a combined 51.9 percent of the fresh bread market, according to the latest Roy Morgan results in the year to June 2018.

In total, supermarkets now comprise over two-thirds of the entire fresh bread market, with the remaining 31pc split between specialty bread shops including Bakers Delight, Brumby’s Bakery and other bread shops, and between delicatessens, milk bars, convenience store and other stores.

Over the last eight years there have been three stand-out performers in the fresh bread market.

Despite facing a resurgent Coles in recent years Woolworths has retained its title as Australia’s largest retailer of fresh bread capturing a market-leading 26.6pc of the fresh bread market.

Other outlets for fresh bread including IGA and other supermarkets as well as Brumby’s Bakery and other smaller bread shops and delicatessens, milk bars, convenience stores and other stores have also suffered declines in their share of the fresh bread market of between 1pc – 2.4pc.

These results are from the Roy Morgan Single Source survey of over 50,000 people per annum, including over 12,000 grocery buyers and covered in the latest Roy Morgan Supermarket Grocery Currency Reports. 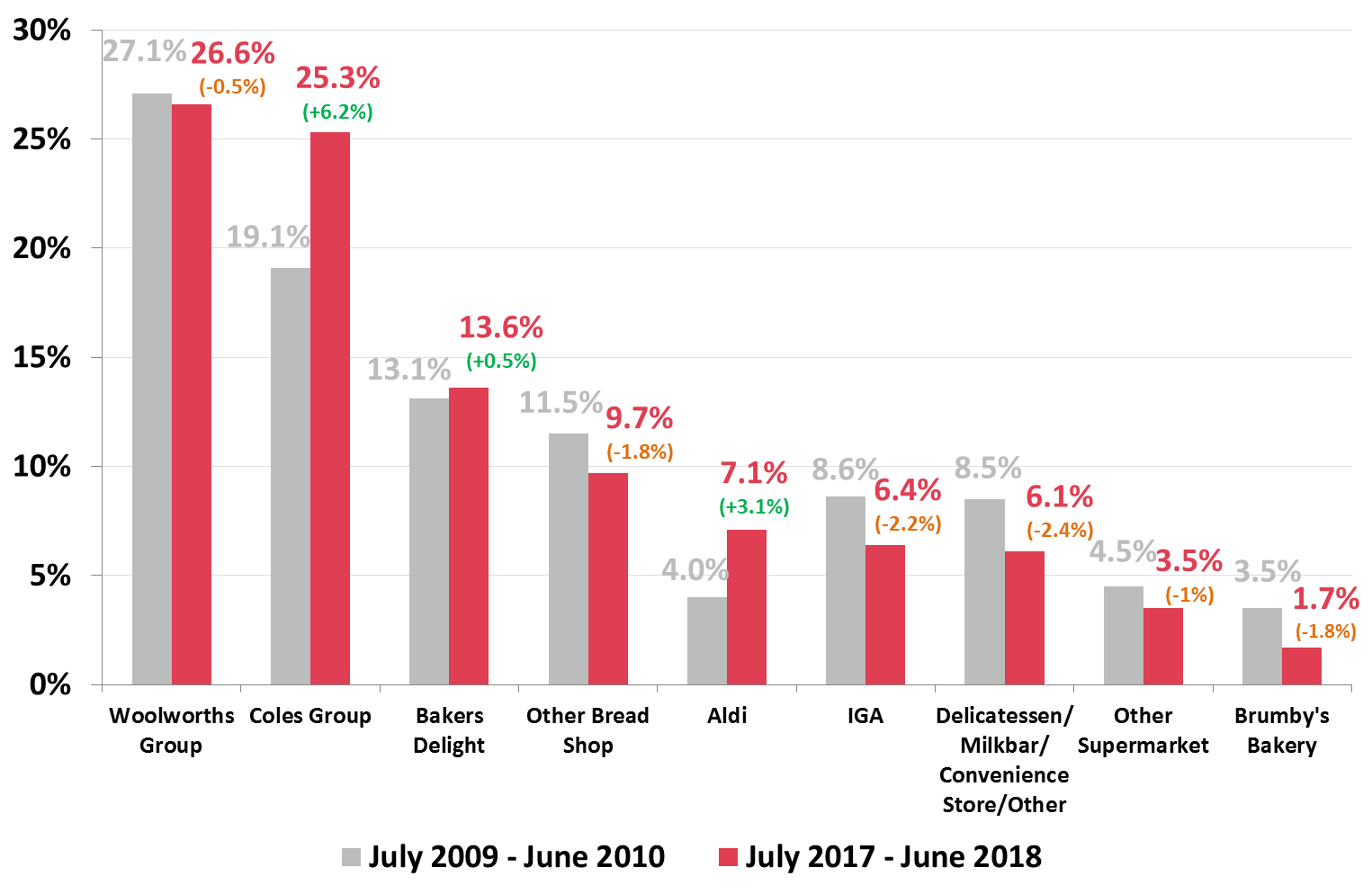 Roy Morgan CEO Michele Levine says although Woolworths and Coles have now comprised over 50pc of the fresh bread market for over five years, the success of Bakers Delight and Aldi in growing market share shows there is space for nimble competitors.

“There are two competitors in particular outside the ‘Big 2’ who have grown their share of the fresh bread market and they come from very different origins,” she said.

“German discount supermarket chain Aldi has made a huge impression on the Australian marketplace since opening its first store just over 15 years ago in 2001 and now captures 7.1pc of the fresh bread market, up 3.1pc since 2010.

“Aldi’s success has been built upon not only discount prices but also a reputation for reliability, meeting the needs of consumers and being honest about what it has to offer. Aldi has consistently rated as one of Australia’s most trustworthy brands including retaining its spot as Australia’s most trusted brand in this week’s Roy Morgan Net Trust Score survey for July.

“Bakers Delight trails only the ‘Big 2’ as an outlet for fresh bread and this shows that a well-run business can take on and beat more highly capitalised competitors with a well-defined strategy in a ‘niche’ market by offering great customer service and exceling at their core competency.”