GRAINCORP today unveiled an extensive upgrade to its site at Cunningar, its closest receival point to NSW’s Port Kembla, which will now be able to load a 44-wagon train 80 per cent faster than previously. 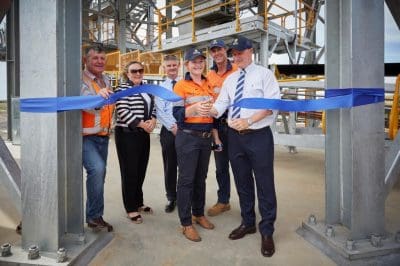 Member for the Riverina and Federal Minister for Small Business, Michael McCormack, cuts the ribbon at GrainCorp’s Cunningar site.

The upgrade to the site on the south-west slopes near Harden will cut the existing rail cycle time to Port Kembla to 24 hours, a 50pc improvement on the previous timeframe.

The $8.1 million upgrade was jointly funded by the Australian Government, the Cunningar and Harden communities, Hilltops Council, and GrainCorp.

“The Cunningar site project has set the benchmark of how public, private and growers can come together to deliver a fantastic outcome for the whole community,” GrainCorp general manager operations, Nigel Lotz, said.

“The broader Harden area is one of the most reliable cropping regions in Australia so having access to a modern, efficient supply chain is vital for growers to realise their potential.

“We have been able to deliver one of the most efficient grain receival sites in Australia, with record turnaround times, rail loading and cycle times.”

Mr Lotz said the revamped site would move “thousands of tonnes” back to rail from road.

The upgrade was announced in 2015 as part of the Australian Government’s National Stronger Regions Fund (NSRF), and construction started in February this year.

The Cunningar upgrade is part of GrainCorp’s Project Regeneration initiative which is investing in rail-focussed infrastructure.