REGENERATIVE food and agriculture group, Wide Open Agriculture Limited (WOA), is about to test its worth on the Australian Stock Exchange. Last week it launched its Initial Public Offering (IPO) in its homeland, the West Australian wheatbelt. 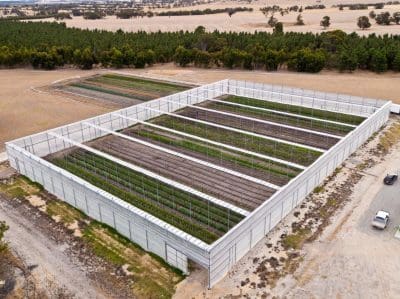 WOA non-executive director and Buntine grower, Stuart McAlpine, is part of the IPO roadshow, and said the company was offering investors a chance to buy into a sustainable system of production.

“We’ve moved to bigger farms and less people, and horticulture is the key to getting more people to work in the wheatbelt and keep these areas going,” Mr McAlpine said.

“We need to get diversification back into our system, and this is one way to do it.”

WOA is seeking to raise $5 million at 20 cents per share with a minimum subscription of $2000 through the IPO, with all funds to be invested directly into the wheatbelt.

This will include a two-year expansion program at its Arthur River facility, which has been selling horticultural produce since last April, the establishment of a second similar operation in the WA wheatbelt, and promotion and expansion of its Food for Reasons brand and products.

In addition, the float money will fund the broadace East Kulinbah Project in which Mr McAlpine and his wife Leanne are involved, and assess additional projects.

Produce includes salad and root vegetables and herbs, which have been distributed in Perth and via wheatbelt towns, and marketed under the Food for Reasons brand.

This links to the “4 returns” framework that seeks to deliver financial, natural, social and inspirational returns.

The company’s chairman, Anthony Maslin, and CEO, Dr Ben Cole, are planning to take the IPO roadshow to Australia’s eastern states and to Europe, where they have a connection through Commonland Foundation.

Commonland is based in The Netherlands, and supports and invests in large-scale landscape restoration projects based on sustainable “4 returns” business cases.

It is WOA’s largest shareholder, and will hold a 17 per cent stake in the company on completion of the offer.

Mr McAlpine and his wife, Leanne, are large-scale broadacre growers with a long-term interest in improving soil health, and in 2016 sold 310 hectares of their land to WOA.

Known as the East Kulinbah Project, the block is divided into three zones, with the 150ha economic zone leased by the McAlpines for wheat, canola and sheep production.

The 98ha combined zone is jointly managed by WOA and the McAlpines, and is home to around 60,000 forage shrubs which provide fodder for sheep over summer and autumn, and environmental benefits.

The 62ha nature zone is exclusively managed by WOA, and will be used to expand the biodiversity of East Kulinbah.

“This project is really about trying to find a way to get off the treadmill in terms of the high-input system we have in a variable climate, and moving to a more regenerative system.”

“We struggle due to limited yields, and an annual rainfall which we used to think was 330 millimetres, but is now near to 300mm.

“Here in WA, we’re a bulk-commodity state trying to keep up with Russia and the Black Sea in grain production, and we have a low base in terms of value-adding to our raw products.

Mr McAlpine said he was upbeat about the future of WOA because it had already found solid support in WA, which has 60 per cent of the world’s population living within two hours of its time zone.

“There are huge opportunities here, and if we think bold, investors will get behind us.”

The IPO roadshow last week kicked off in Moora, Dalwallinu, Goomalling, Merredin, Narrogin and Williams, and is in Perth this week.

Dr Cole said it was important to start the offer in the wheatbelt, because making a difference to the people and land of the region was what Wide Open Agriculture was about.

“Our ‘4 returns’ on investment are about creating strong, sustainable financial returns, making a positive impact on the communities and ecosystems in which we operate, and bringing hope and inspiration back to the wheatbelt,” Dr Cole said.

“We hope to be the first ‘4 returns’ company ever listed on not just the ASX, but on any global stock exchange,” he said.

Dr Cole said he was excited to share the company’s unique investment opportunity and hoped as many wheatbelt residents as possible choose to participate in the IPO.

The IPO closes in June, and the company hopes to list on the ASX by the end of the year.