High commodity prices and a record winter crop have driving Australian agricultural earnings to a record high in 2021-22. Photo: ABARES

AGRICULTURAL commodities are forecast to reach record highs in 2021-22, but a return to normality is on the way, according to figures in ABARES Commodities Quarterly released today to coincide with the opening day of Outlook 2022, ABARES annual Outlook conference.

“The gross value of agricultural production is forecast to be a record $81 billion in 2021-22, beating the last year’s record by over $12 billion,” Dr Greenville said.

“This is an unprecedented result, and it can be put down to a combination of record high crop production, and the highest prices in real terms for Australian agricultural produce in 32 years.

“The total value of agriculture, fisheries and forestry production will also reach a record of almost $87 billion in 2021-22.”

“We are expecting the gross value of agricultural production to fall by around 6 per cent to $76B next financial year, which is still the second highest on record.

“With production at record highs and high prices, increases in income are likely to far outweigh the additional pressure of higher input costs for fuel, fertiliser, chemicals and labour.”

Speaking today in the opening session of the ABARES Outlook conference, Dr Greenville said farm cash incomes jumped in 2021-22, up around 40pc for cropping operations, and 35pc for livestock ones, when compared with 2020-21.

“Next year is likely also to be a pretty good year.”

Dr Greenville said disruptions to supply chains, and upward pressure on input costs, as well as the likely return to less favourable seasons, could pressure returns in the medium to longer term.

“We know that challenging seasons will return.”

“In the out years, there’ll be pressure, so we cannot lose sight around long-term economic opportunities.”

He said these included the forecast tripling in size of the market for high-value goods in countries including Indonesia.

“This type of growth represents a real opportunity for Australia.”

“At the moment, output price has been the dominant factor; as we look forward, we’re not sure that will keep going.

Dr Greenville said global markets were seeing a shift in the willingness of governments and consumers to pay for sustainability credentials.

“These trends are being extended to carbon markets.

He said Australian beef and wheat sat “around the middle of the pack” in terms of sustainability credentials, so room for improvement existed.

“At the moment, Australia trades on its clean and green image; we are one of multiple suppliers that can deliver on this.

“If we don’t do it efficiently and competitively, someone else will.”

He said global food systems were facing three challenges: to ensure food security; to provide incomes and livelihoods for people working in the food chain, and to do it all sustainably. 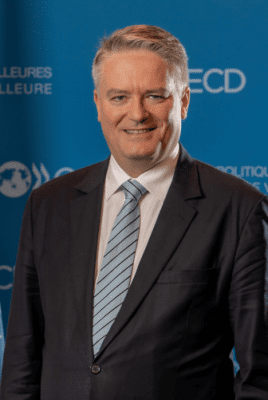 He said high input costs compounded by the uncertainty of the Russia-Ukraine conflict were already impacting some areas of production.

“Today some food supply chains are under pressure.

“It is critically important to avoid policies that increase supply pressures.

“We are also identifying the best ways to facilitate trade of perishable products.”

OECD data indicate OECD, EU and some emerging economies subsidised an averaged annual figure of US$720B over 2018-2020 on agriculture.

“This is higher than fossil fuel and industrial subsidies.

“Much of it is spent in ways which do not foster sustainability.”

Mr Cormann said nearly two-thirds were delivered through market-distorting practices such as price supports and measures linked to output, and with unconstrained use of inputs.

“They tend to benefit those with the largest landholdings.”

Mr Cormann said Australia’s ability to invest in agriculture for the public good represented almost half its investment, and boosted growth in productivity.

This compared with around only one dollar in six globally.

“Investments are most effective when they involve public-private partnerships.

“This is precisely the raison d’etre of research and development corporations.”

Mr Cormann said they have been the cornerstone of Australian industry for more than 30 years, and have helped to foster domestic production and export markets.

He said sustainability would be part of Australia’s competitive advantage.

“Investing in sustainable innovation will become an increasingly competitive advantage.”

“As the world’s seventh largest exporter, we are counting on Australian insights and leadership.

Mr Cormann said OECD wanted to build on the target of global net zero emissions by 2050 as set at COP26, and that shifting carbon emissions from one part of the world to another was not part of the solution.

“We need to ensure more ambitious action on climate change.”