This is the payoff for three years of work building its brand and making connections in one of the world’s largest and most competitive health food markets.

Openway director Kane Fetterplace said he was on an emotional rollercoaster when the deals came through.

“I went from really excited to calm as the plan had come together, to cautious because we now had to deliver and the global supply chain is challenged this year,” Mr Fetterplace said.

These brands are Table of Plenty, Red Tractor, Keep It Cleaner, Raise The Bar and Hammer & Tuffy’s.

The 200-person company has a factory in Clayton South, Victoria, and offices in Melbourne, Shanghai and Portland, Oregon.

The first shipment of Red Tractor oats arrived in the US in late May.

One is Three Farmers in Narrogin, Western Australia.

Three Farmers was the first broadacre farm in Australia to grow wheat/gluten-free oats.

It was also the first farm to grow quinoa commercially in Australia.

Three Farmers co-founder Megan Gooding said provides a reliable source of income for producers, and shines a spotlight on the high quality of Australian oats and farming practices.

“This is such a unique opportunity as a farmer,” Ms Gooding said.

“It gives us the chance to showcase our sun-ripened Australian oats to a large market that Australia has not penetrated previously.”

The fifth-generation farming family is Australia’s leading grower of organic oats and flaxseed.

Based in Hamilton, Victoria, Waltanna Farms has been growing oats since 1876 and flaxseed since 1946. Openway has been exporting to the US since 2017.

In July 2020, the company acquired a small US granola business called Hammer and Tuffy’s and opened an office in Oregon.

Over the next 18 months, it met with potential retailers, built connections and grew its brand.

Red Tractor oats and Raise the Bar health bars will be available at 400 Sprouts stores.

Sprouts is the leading health food retailer in the US and has exclusive rights to the two brands until the end of 2022.

Red Tractor oats will also be available at 1,300 Kroger stores and 150 Albertsons stores.

This is in addition to Amazon.com, where Red Tractor oats have been available since 2018.

Mr Fetterplace said these deals come at a time that US cereal manufacturers are currently struggling to source oats for their products due to adverse weather conditions are affecting harvests in North America.

“Supply issues are pushing up prices in the US and prompting companies to diversify.

“They’ve never looked at Australia as a possible supplier. 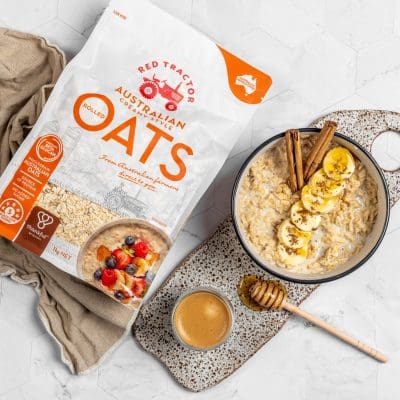 “We’ve now got a golden opportunity to export more of our top-quality oats to the US.”

Ms Gooding said Australia’s two major competitive advantages over other exports include that local oats are grown over winter and are naturally ripened by the sun.

She said most of the oats the US uses come from Canada where they are grown over summer and use glyphosate more commonly in the farming process.

“American customers will notice the difference in the quality of our oats.”

“The fact that they are sun-ripened makes our oats smoother, creamier and cleaner.”

Mr Fetterplace, Ms Gooding and Ashley Wiese (another Three Farmers co-founder) travelled to the US in May 2022.

They met with two more US retail titans as interest in Australian breakfast products continues to grow.

At the meetings with the retail representatives, they presented the cooked oats for a taste test.

“You could tell by the looks on their faces that they preferred the taste of our product,” Mr Fetterplace said.

Both retailers have asked Openway to provide supply solutions and discussions continue for further opportunities in the years ahead.

Openway is eager to expand its presence in North Asia beyond China.

It landed its first deal for Red Tractor oats and granola in Taiwan in April 2022 after Austrade introduced the company to a distributor.

Austrade is also introducing Openway to potential customers in South Korea and Japan.