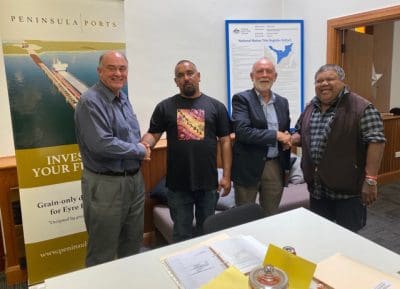 AN INDIGENOUS Land Use Agreement (ILUA) supporting the development of the Port Spencer deep-water grain-export facility in South Australia has been signed this week by the Barngarla Determination Aboriginal Corporation (BDAC) and Free Eyre Ltd (FEL) and its subsidiary Peninsula Ports Pty Ltd (PPPL).

Speaking at the ILUA signing in Port Lincoln, FEL and PPPL chairman John Crosby said the agreement reflected the desire and intent of both parties to work together to deliver a project that supports the region inclusive of the Barngarla Community.

Mr Crosby said the agreement was the first of its kind to include Aboriginal share ownership in a grain port facility in South Australia.

“This historic agreement…will see us working together as shareholders in Peninsula Ports to deliver long-term mutual benefits for the Barngarla people, Eyre Peninsula’s grain growers and the local community.”

“Both parties entered into the discussions in good faith and have successfully achieved an outcome which we consider will set the benchmark for business collaboration with traditional owners.”

The ILUA will enable Barngarla to have share ownership in the facility as well as creating the basis for the future development of an indigenous ranger program in the region.

BDAC chair Jason Bilney said the organisation has welcomed the opportunity to be an integral part of the project.

“It is an important recognition of our culture and the connection we all have to Country,” Mr Bilney said.

“The Barngarla people having ownership of this project is important, as it recognises and respects us as the first people for the area.

The signing of the ILUA establishes the involvement of the Barngarla community in the grain industry on Eyre Peninsula through a project which has targeted an annual grain throughput of 1 million tonnes (Mt) from an average EP production of 2.5Mt.

FEL has recently submitted its Public Environmental Report to the South Australian Government.

It seeks approvals for amendments to the existing Major Project Status approvals granted to Centrex Metals Ltd and transferred to FEL with the purchase of Centrex’s Port Spencer land in June 2019.

Construction is targeted to commence in April 2020 and to be completed for wet testing in September 2021.